The requested exemption is for 501(c)(3) rescue organizations who comply with government regulations, including USDA-APHIS issued Import Permits

VASS, N.C., June 22, 2021 (SEND2PRESS NEWSWIRE) — China Rescue Dogs is requesting an exemption for 501(c)(3) rescues from the recent U.S. Centers for Disease Control and Prevention (CDC) suspension of dogs entering the U.S. from countries classified as high risk for rabies. 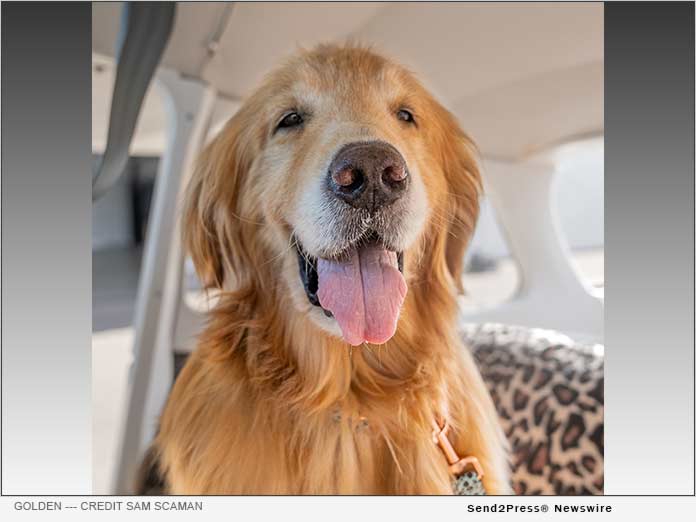 PHOTO CAPTION: This is Golden. He now lives in Toledo, Ohio. He was rescued from a slaughterhouse in China and arrived in the United States in May 2021. Dogs just like Golden will no longer be allowed to enter the U.S. once the CDC suspension takes place. (Picture Credit: Sam Scaman)

The suspension, which was announced on June 14, states that effective July 14, 2021, dogs imported from 113 countries which present a high risk of spreading the canine rabies virus variant (CRVV) may not enter the U.S. for a period of at least one year.

The CDC claims that this emergency action is the result of an increase over the last year of incomplete, inadequate, or fraudulent rabies certificates presented upon entry to Customs and Border Patrol (CBP). The CDC has stated that it denies entry to about 200 dogs per year, permitted or otherwise. In its Report justifying the suspension, the CDC claims that, in 2020, this number rose to 450 cases in which dogs were denied entry due to incomplete, inadequate, or fraudulent rabies certificates. This number represents less than 1% of the estimated 60,000 dogs annually imported from high-risk countries.

“No one, least of all non-profits that rescue dogs, disputes the importance of ensuring that dogs with rabies do not enter the United States,” said Jill Stewart, founder of China Rescue Dogs. “However, the CDC’s solution is heavy-handed, tremendously overreaching, and inhumane. There are many responsible organizations that go above and beyond governmental requirements to help ensure the health and well-being of the dogs they rescue and the adopters they serve.”

501(c)(3) rescues such as China Rescue Dogs ensure the dogs they import enter the U.S. with USDA-APHIS issued Import Permits, which require a valid rabies certificate and a health certificate attesting to the age and good health of the dog. The permit also requires that the dog has been vaccinated against distemper, hepatitis, leptospirosis, parvovirus and parainfluenza virus (“DHLPP”). This paperwork is thoroughly reviewed and verified by the USDA and Customs Brokers, are uploaded to the CBP system for CDC review, and are reviewed a final time upon landing by CBP. Thus, three government agencies review the documentation before the dog can enter the U.S.

501(c)(3) rescue organizations who have consistently complied with these regulations and provided proper documentation, including those with USDA-issued permits, are included in the CDC’s suspension.

China Rescue Dogs requests that the CDC include an exemption to the suspension for all 501(c)(3) rescue organizations, such as themselves, who have continually worked in partnership with the government by only importing dogs with a USDA-APHIS issued Import Permit, with the involvement of CBP, ensuring the validity and completeness of required rabies certificates.

Failure to provide an exemption would mean companies seeking to profit off the sale and/or exploitation of dogs will benefit, while non-profits that rescue abused, abandoned, homeless dogs, many of which are destined for the dog meat trade, will suffer.

China Rescue Dogs is a 501c3 organization, with a global mission to rescue and rehabilitate dogs from the meat trade in China and provide them with loving homes in the U.S. and Canada. Working with trusted rescues and shelters in China, we first remove the dogs from imminent harm, treat the physical and psychological injuries from severe abuse and neglect, and socialize the dogs so that they can be integrated into loving family environments. Then, in partnership with other rescues in the U.S. and Canada, we locate adoptive homes for the dogs and arrange transportation from China to their new forever families in the U.S. and Canada. We hope through our rescue efforts we can shine a light on the dog meat trade in China and other countries and, thereby, encourage others to advocate for the end of the dog meat trade and speak up for those who have no voice. Learn more about China Rescue Dogs at https://chinarescuedogs.org/ or follow us on Facebook, Twitter, Instagram, and TikTok.

Caption: This is Golden. He now lives in Toledo, Ohio. He was rescued from a slaughterhouse in China and arrived in the United States in May 2021. Dogs just like Golden will no longer be allowed to enter the U.S. once the CDC suspension takes place. (Picture Credit: Sam Scaman)

View More NonProfit and Charities News
"No one, least of all non-profits that rescue dogs, disputes the importance of ensuring that dogs with rabies do not enter the United States," said Jill Stewart, founder of China Rescue Dogs.

LEGAL NOTICE AND TERMS OF USE: The content of the above press release was provided by the “news source” China Rescue Dogs or authorized agency, who is solely responsible for its accuracy. Send2Press® is the originating wire service for this story and content is Copr. © China Rescue Dogs with newswire version Copr. © 2021 Send2Press (a service of Neotrope). All trademarks acknowledged. Information is believed accurate, as provided by news source or authorized agency, however is not guaranteed, and you assume all risk for use of any information found herein/hereupon.