LOS ANGELES, Calif., Aug. 26, 2021 (SEND2PRESS NEWSWIRE) — With the CDC reporting overdose deaths up 30 percent in 2020, the Church of Scientology International reaches out with vital information anyone may use to take effective action at home and in their communities. Effective drug education is more urgent now than ever. Because the best time to end drug abuse is before it begins. 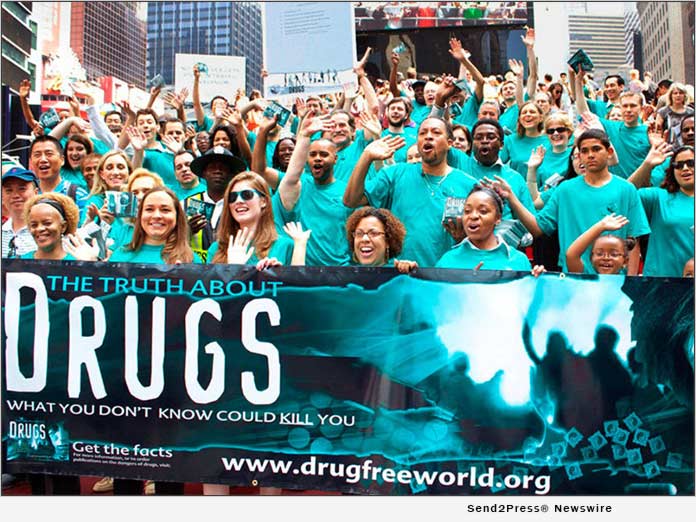 Scientology Churches around the world are marking International Overdose Awareness Day, August 31, by providing one of the most important deterrents to drug abuse, addiction and overdose: The Truth.

“We have been in the forefront of drug education for more than three decades,” says Fabio Amicarelli, Director of Humanitarian Programs of the Church of Scientology International. “The results of the Truth About Drugs campaign of Foundation for a Drug-Free World confirm that when young people are presented with the unvarnished facts about what drugs are and what drugs do they are far more likely to reject them on their own.”

Drug education and prevention work. The United Nations Office on Drugs and Crime states, “Prevention strategies based on scientific evidence working with families, schools, and communities can ensure that children and youth, especially the most marginalized and poor, grow and stay healthy and safe into adulthood and old age. For every dollar spent on prevention, at least ten can be saved in future health, social and crime costs.”

To empower anyone wishing to take effective action to help reverse this devastating crisis, Scientology Churches are scheduling drug prevention open houses where anyone may learn how to use this campaign, receive booklets and videos, and request training on how to deliver the entire program. The Church of Scientology provides its award-winning Truth About Drugs resources free of charge to educators, parents, school resource officers, nonprofits and community leaders.

The Truth About Drugs initiative:

Scientology Network will mark International Overdose Awareness Day with a full day of relevant programming—a marathon dedicated to raising awareness on the true dangers of drugs to reverse the rising tide of drug overdoses. This will include episodes of the original series Voices for Humanity illustrating how dedicated activists use the Truth About Drugs campaign to create a sea change in their communities.

To make these materials available to anyone wishing to tackle the drug crisis, the Church of Scientology International Dissemination and Distribution Center in Los Angeles, California, produces and ships out Truth About Drugs booklets, DVDs and education packages free of charge to parents, educators, law enforcement, community groups and nonprofits.

For more information, contact the nearest Church of Scientology. To access all Truth About Drugs materials and enroll on free eCourses available in 20 languages, visit the Foundation for Drug-Free World website. And tune in August 31 to the Scientology Network for a full day of drug prevention programming, available on DIRECTV Channel 320 and streaming at Scientology.tv, on mobile apps and via the Roku, Amazon Fire and Apple TV platforms.

The Founder of Scientology is L. Ron Hubbard and Mr. David Miscavige is the religion’s ecclesiastical leader.

View More Religion and Churches News
"We have been in the forefront of drug education for more than three decades," says Fabio Amicarelli, Director of Humanitarian Programs of the Church of Scientology International.