"With some of the most respected artists and designers in the world on our faculty, the Laguna College of Art and Design has an impressive reputation that places it among the finest in the nation," said President Jonathan Burke.

The 25th Annual Collector’s Choice honors Terry Smith and Wayne Peterson, as honorary chairs. Smith and Peterson, long-time Laguna Beach residents and community leaders, have supported the college and Collector’s Choice since 2001. Smith has held various leadership positions as an LCAD trustee. Peterson is the former mayor of Laguna Beach. Both Smith and Peterson are active in the college’s premiere support group, the President’s Circle, which has championed student scholarships and other campus enhancements.

“With some of the most respected artists and designers in the world on our faculty, the Laguna College of Art and Design has an impressive reputation that places it among the finest in the nation,” said President Jonathan Burke. “If you look at some of most prominent galleries, museums, movie studios, fashion and active design companies and gaming studios, you will find our faculty, students and alumni at work. Their accomplishments, in part, can be traced to the dedication and funds raised through our Collector’s Choice event. Our donors and friends, such as Wayne and Terry, have empowered us to educate, challenge, inspire and place our students and alumni into positions of great influence.”

Burke added that throughout its 25-year history, Collector’s Choice has raised over $1 Million for the LCAD fund, benefitting student scholarships, college growth and programs.

Collector’s Choice Co-Chairs, Nelson Coates and Mary Ferguson, announced that attendees who reserve tables by March 30, 2013, which happens to be Vincent van Gogh’s birthday, will receive a special gift of 25 raffle tickets (a $250 value).

Co-Chairs Coates and Ferguson said, “Each year, art collectors, philanthropists and friends who love our students at the college, look forward to an exciting evening in our spectacular canyon setting. We are honored to celebrate the academic and artistic excellence of our students, faculty and alumni and friends.”

More than 400 guests are expected to attend the annual summer evening that will include dinner and a variety of original artwork generously donated by professional artists, including faculty, alumni as well as students. A jazz club, L’ Apres Soiree, will open at the end of the evening to cap what will be a lively event.

About The Laguna College of Art and Design:

Laguna College of Art and Design (LCAD) is one of an elite number of institutions that has both regional accreditation from the Western Association of Schools and Colleges and national accreditation by the National Association of Schools of Art and Design. Founded in 1961 as the Laguna Beach School of Art, LCAD has grown to include five undergraduate majors and a graduate department. Bachelor of Fine Arts degrees are offered in Drawing and Painting, Illustration, Graphic Design, Animation, and Game Art. The graduate program awards a Master of Fine Arts in Drawing and in Painting. The college has received especially high marks for the use of technology and the liberal arts in its art and design curriculum. Graduates are career-ready and receive assistance from the Office of Career Services for the college’s many contacts in art and visual industries, resulting in excellent job placement. 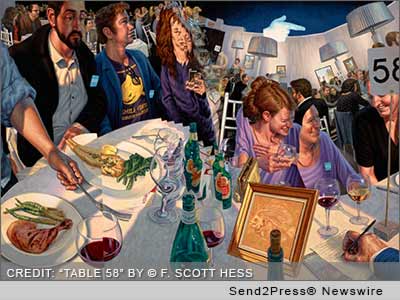 NEWS ARCHIVE NOTE: this archival news content, issued by the news source via Send2Press Newswire, was originally located in the Send2Press® 2004-2015 2.0 news platform and has been permanently converted/moved (and redirected) into our 3.0 platform. Also note the story “reads” counter (bottom of page) does not include any data prior to Oct. 30, 2016. This press release was originally published/issued: Thu, 13 Mar 2014 06:59:25 +0000

View More Education and Schools News
"With some of the most respected artists and designers in the world on our faculty, the Laguna College of Art and Design has an impressive reputation that places it among the finest in the nation," said President Jonathan Burke.

LEGAL NOTICE AND TERMS OF USE: The content of the above press release was provided by the “news source” Laguna College of Art and Design or authorized agency, who is solely responsible for its accuracy. Send2Press® is the originating wire service for this story and content is Copr. © Laguna College of Art and Design with newswire version Copr. © 2014 Send2Press (a service of Neotrope). All trademarks acknowledged. Information is believed accurate, as provided by news source or authorized agency, however is not guaranteed, and you assume all risk for use of any information found herein/hereupon.