ADDISON, Ill., June 19, 2017 (SEND2PRESS NEWSWIRE) — High quality fiction for children can be an impossible niche to satisfy and that is why Aaron Ozee, bestselling author of “My Darling Child Shiloh,” has been gathering so much attention. Ozee’s work with “My Darling Child Shiloh” garnered near universal praise when it was released in 2016. Ozee, a prolific author with 10 other pieces of work under his belt, immediately seized upon this success in order to develop his most ambitious project yet: “Regulus” (ISBN: 978-1387010790). 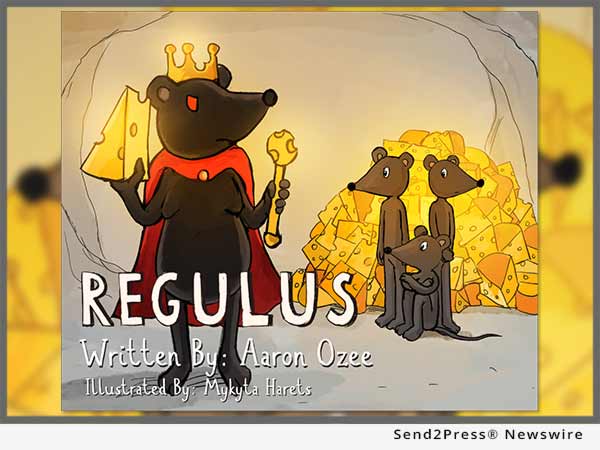 “Regulus” is the story of all stories and Ozee held nothing back when crafting this project. The story of Regulus is equally engaging and impactful as it blends high concept with childlike wonder, making it an incredible read for children of all ages. “Regulus” follows the tale of three tiny mice, representative of innocence and youth, as they cross paths with the titular character Regulus.

“Regulus” is a representation of the more troubling moments in life and a subject that so few children’s authors dare to touch upon despite the gentle nature of such a tale.

The story of “Regulus” is going to be told not just on paper as it will be displayed in several different forms of media, as well. For “My Darling Child Shiloh” we saw Ozee develop a relationship with a stunning stop-motion artist by the name of Martyna Koleniec.

Koleniec and Ozee worked hand-in-hand to develop a gorgeous animated film adaptation of “My Darling Child Shiloh,” eventually releasing it to the public where the video quickly racked up over 100,000 views globally. Ozee is revisiting this partnership in order to once again port his work into a more consumable medium, thus giving children the world over the opportunity to engage in the story of “Regulus.”

Aaron Ozee has already detailed an extensive publication plan for “Regulus” in order to get it in front of the eyes of as many people as possible. “Regulus” will be published and put to market on June 24, 2017. The project will be released through Lulu Press and Smashwords in both print and eBook format.

Following an initial sales volley, Ozee will then be bringing “Regulus” to acclaimed publication wholesaler, Ingram Book Company for a global distribution deal. Once in distribution you will be able to find “Regulus” on Amazon, Barnes & Noble, Half Price Books, Alibiris, Books-A-Million, Abe Books, Google Play, and through other booksellers.

As the push for “Regulus” reaches a fever pitch it can be important to remember just how far Aaron Ozee has come as an author in such a short period of time.

Ozee first began writing stories when he was just five years old and would go onto publish his first book, “Celestial Inferno: Poems of Another Realm,” at age 15 while still attending Addison Trail High School. A foray into poetry led Ozee to begin garnering national attention as his anthology work, “Ironic Perfection: Poetic Works of Aaron Ozee,” became a hit with the masses.

“Ironic Perfection” was Ozee’s seventh published work and, perhaps, his most impactful to date. Now, Ozee is being brought on to speak at schools, bookstores, and national events in order to share his success as both an entrepreneur as well as an author. Fans who wish to follow along in Ozee’s journey should remember to mark June 24 down on their calendars as the national and international release of “Regulus” comes closer by the day.

For all media inquiries, please call the offices of Ozee Holdings at (630) 656-0323. Additional information regarding the debut of Regulus will shared on Facebook (@AaronOzee), Twitter, (@AaronOzee), or via Aaron Ozee’s official author website at http://www.aaronozee.com/. To buy the new book, visit http://www.lulu.com/spotlight/aaronozee.

LEGAL NOTICE AND TERMS OF USE: The content of the above press release was provided by the “news source” Aaron Ozee or authorized agency, who is solely responsible for its accuracy. Send2Press® is the originating wire service for this story and content is Copr. © Aaron Ozee with newswire version Copr. © 2017 Send2Press (a service of Neotrope). All trademarks acknowledged. Information is believed accurate, as provided by news source or authorized agency, however is not guaranteed, and you assume all risk for use of any information found herein/hereupon.