PHILADELPHIA, Pa., July 30, 2020 (SEND2PRESS NEWSWIRE) — Danielle Alura, Elite Miss Pennsylvania, received the 2020 Olive Branch Certificate of Recognition from the Coalition for Peace Action for her efforts against climate change, to build a green economy. One of the achievements this year was Danielle held a socially distanced green talk outside Philly for hotel owners. 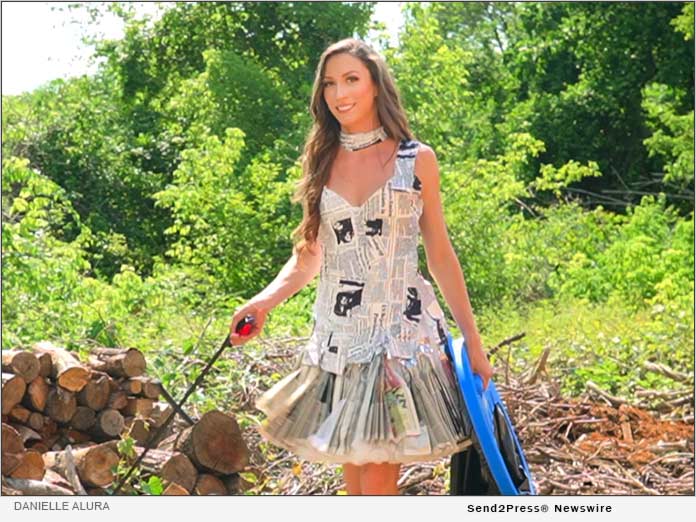 PHOTO CAPTION: In her first single release happening soon, Danielle Alura has made outfits completely out of single use items. Here she wears one made out of newspaper.

The hotel association she met with as her first step of influence was AAHOA, the Asian American Hotel Owners Association, the majority being immigrant owned. The attendees interested in her green program represented more than 140+ east coast hotels. She has already been able to convince more than 20 hotels so far to pledge against their plastic waste!

By choosing to adopt at least one of her suggested plastic prevention initiatives into their business operations, this will successfully prevent over 1 ton of waste from our communities’ landfills by 2021. She is still meeting with more hotels and franchises as they voice interest in her free green program to reduce plastic waste and save money while going green. A new hotel franchise with more than 100 hotels is on board to implement her “No Excuse for Single Use” Program across their whole franchise.

Danielle is the current Elite Miss Pennsylvania, a member of the United Nations of Greater Philadelphia, a member of their event committee, a member of the Coalition for Peace Action and a supporter of Family Promise, a non-profit helping the homeless. She has sat on their Executive Board as the Secretary, Chair of the event committee and Vice President of Family Promise of Orange County (FPOC). Danielle has helped raise more than $400,000 for charity in the past few years, of which $82,000 was raised virtually over the course of 24hrs for FPOC in the middle of this pandemic for the families.

Danielle admired how green conscious her mother was when growing up. Being the oldest of 4 adopted kids, she remembers, wearing hand-me-downs, recycling and repurposing things they simply couldn’t throw away.

“I still remember leaving swim team practice and dropping the empty glass bottles into the recycling bins and hearing them break, or pulling over and watering neighbor’s thirsty plants on their porch with our water bottles as we drove by.”

After traveling to 9 countries last summer, from the Galapagos Islands, to China – she came across trash everywhere. Upon returning to the states, she searched for ways to create awareness and discovered there was a pageant system designed for such green leaders. Her platform: No Excuse for Single Use (NEFSU).

“First, I encouraged people to begin a zero waste home during the pandemic by taking simple green steps. I post a new sustainable video tip weekly to help you add new green habits to your lifestyle. However, going ‘green’ to impact climate change does not strictly rely on us as individuals. We need corporations to contribute their efforts for climate change. Otherwise – as individuals alone – we won’t even make a dent in pollution. Therefore, the other side of my platform focuses on business. I have partnered with hotels as well to pledge against plastic waste.”

Danielle has also lobbied alongside PennEnvironment, United Nations Greater Philadelphia and the CFPA against single use plastics in front of many elected officials. They also talked about the horrors of landfill pollutants into our water, air and food and the importance of increasing Electric Vehicle infrastructure. Danielle’s platform “No Excuse for Single Use” will now be utilized by Rep. Ronni Green as a Zero Waste Home resource for the community.

Danielle Alura has recently written a number of original songs – all to the tune of climate change. Her whole life she has written original music but kept it only for her family to enjoy. Now, she will be releasing the first song ever entitled “Can You Hear Me.” The original work also features a number of familiar celebrity faces endorsing her efforts for plastic reduction.

Write your elected officials, write your favorite brands on how it’s important to go green and remember – there’s “no excuse for single use.” Danielle is competing for Elite Miss Earth USA in January.

For more information and to follow her journey go to: https://www.facebook.com/elitemisspennsylvania

*PHOTO link for media: https://www.Send2Press.com/300dpi/20-0730s2p-Danielle-Alura-300dpi.jpg
*Photo caption: In her first single release happening soon, Danielle Alura has made outfits completely out of single use items. Here she wears one made out of newspaper.

View More Environment and Ecology News
“I still remember leaving swim team practice and dropping the empty glass bottles into the recycling bins and hearing them break, or pulling over and watering neighbor's thirsty plants on their porch with our water bottles as we drove by," says Danielle Alura.

ABOUT THE NEWS SOURCE:
Danielle Alura

After Traveling more than 40 countries Danielle Alura has an understanding of many cultures and an even deeper appreciation for the USA. She is an international model actress and singer, has graced more than 30 magazines pages as a model and is part of Netflix and Apples next big show. When she’s not in front of the camera she can be found on her exotic fruit farm or helping rehouse homeless families. With the national charity called family promise, Danielle has sat on the Executive board, raised millions of dollars and has so far rehoused more than 350 families. I am miss Florida global USA Danielle Alura.

LEGAL NOTICE AND TERMS OF USE: The content of the above press release was provided by the “news source” Danielle Alura or authorized agency, who is solely responsible for its accuracy. Send2Press® is the originating wire service for this story and content is Copr. © Danielle Alura with newswire version Copr. © 2020 Send2Press (a service of Neotrope). All trademarks acknowledged. Information is believed accurate, as provided by news source or authorized agency, however is not guaranteed, and you assume all risk for use of any information found herein/hereupon.