Said EPIC's Dan Ryan, "We have seen the visible impact of our efforts around our community in advertising for the Foundation as well as their increased communications with sponsors and those they serve, including a new newsletter."

The Joyful Child Foundation has been one of the most significant beneficiaries. For the past two years, EPIC has been the title sponsor of a golf tournament directly benefiting the Foundation, which is dedicated to protecting children from predators and molesters.

Said Dan Ryan, “We have seen the visible impact of our efforts around our community in advertising for the Foundation as well as their increased communications with sponsors and those they serve, including a new newsletter.”

Erin D. Runnion, Founder of The Joyful Child Foundation shared: “The Joyful Child Foundation – In Memory of Samantha Runnion is excited to have the opportunity to bring our BRAVE Programs to the Inland Empire, thanks to the generosity of EPIC Insurance Brokers. Last year’s gift provided training to community partner agencies that serve hundreds of disadvantaged children and we are delighted to have a Master Trainer in the area offering monthly programs at Operation Safe House and establish classes with the City of Riverside’s Youth Programs. EPIC’s support made it possible for The Joyful Child to receive a letter of intent to bring the BRAVE Curriculum to Riverside Unified School District, so that we can train teachers to deliver our age-appropriate safety education in every classroom. It takes a community to keep our children safe and EPIC is leading the way to empower every child to be brave and safe.”

EPIC principal Joe Cotugna added, “We are proud and honored to be able to make such an impact in our community in support of an important organization like The Joyful Child Foundation.”

EPIC employees are very active in their communities on both an individual basis and in teams. COMMUNITY is one of EPIC’s 10 guiding principles, collectively known as “EPICness.” Learn more: http://www.epicbrokers.com/epicness/#tabs.

“We believe strongly in giving back and making a positive difference,” said EPIC principal David McNeil. “It is an integral part of EPIC’s ‘people first’ culture and values.”

About EPIC Insurance Brokers & Consultants:
EPIC is a unique and innovative retail property & casualty and employee benefits insurance brokerage and consulting firm. EPIC has created a values-based, client-focused culture that attracts and retains top talent, fosters employee satisfaction and loyalty and sustains a high level of customer service excellence. EPIC team members have consistently recognized their company as a “Best Place to Work” in multiple regions and as a “Best Place to Work in the Insurance Industry” nationally. 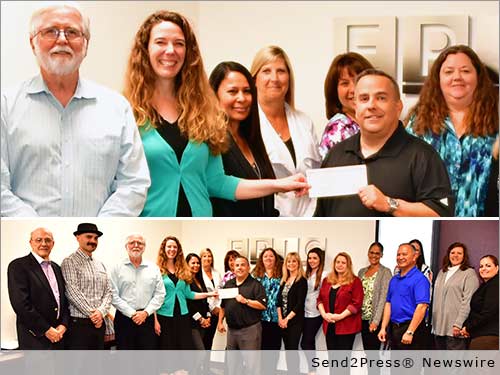 NEWS ARCHIVE NOTE: this archival news content, issued by the news source via Send2Press Newswire, was originally located in the Send2Press® 2004-2015 2.0 news platform and has been permanently converted/moved (and redirected) into our 3.0 platform. Also note the story “reads” counter (bottom of page) does not include any data prior to Oct. 30, 2016. This press release was originally published/issued: Tue, 10 May 2016 05:00:15 +0000

View More Corporate Social Responsibility News
Said EPIC's Dan Ryan, "We have seen the visible impact of our efforts around our community in advertising for the Foundation as well as their increased communications with sponsors and those they serve, including a new newsletter."