"Getting our students to not only think about college, but to engage in the level of work needed to successfully prepare for, and navigate their way into college will require a cultural shift," says Laura Hickson, Florence County School District 3 superintendent.

LAKE CITY, S.C., April 21, 2015 (SEND2PRESS NEWSWIRE) — The Foundation for Ensuring Access and Equity (Marietta, Ga.), a nonprofit assisting students from underserved and underrepresented communities with college and financial aid planning, announced today that Florence County School District 3 College Planning Cohort student, Mikayla Hanna, has been selected as a 2015 Gates Millennium Scholar, the first in the history of the school district.

Florence County School District 3 is located along the infamous South Carolina “Corridor of Shame” — a corridor along Interstate 95 representing some of the highest poverty communities and most underfunded schools in the country. Of the 270 students who began high school in the class of 2015, only 140 students entered the twelfth grade.

Mikayla, whose biological mother died when she was nine-years-old, together with 19 other students participating in a June 2014 college planning cohort, from one of the state’s poorest communities, have been admitted to over 60 colleges and universities and earned nearly $3 million in college scholarships and institutional aid. Mikayla has also been admitted to the prestigious Meyerhoff Scholars program at the University of Maryland – Baltimore County, where she will enter into a joint MD/Ph.D. program.

Mychal Wynn, the author of 27 books, and his wife Nina, also lead the Education Ministry at the Turner Chapel AME Church in Marietta, Georgia have assisted several students, including their son (2012 Gates Millennium Scholar), in gaining acceptance into the country’s highest dollar scholarship program.

Despite Mr. and Mrs. Wynn extending an invitation to the entire 140-student Lake City High School senior class, only 20 rising seniors chose to participate in the cohort and attended the 3-day June 2014 boot camp.

Laura Hickson, announced as the new Florence County School District 3 superintendent to replace retiring superintendent, Dr. V. Keith Callicut, said, “Getting our students to not only think about college, but to engage in the level of work needed to successfully prepare for, and navigate their way into college will require a cultural shift. The 20 rising seniors attending our first college planning boot camp have provided a catalyst for this cultural shift. Their extraordinary outcomes have dispelled any doubts among students, teachers, parents, and the community of the postsecondary options available to our students.”

News issued by: Foundation for Ensuring Access and Equity 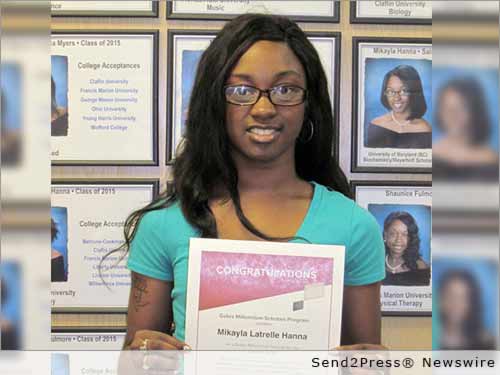 NEWS ARCHIVE NOTE: this archival news content, issued by the news source via Send2Press Newswire, was originally located in the Send2Press® 2004-2015 2.0 news platform and has been permanently converted/moved (and redirected) into our 3.0 platform. Also note the story “reads” counter (bottom of page) does not include any data prior to Oct. 30, 2016. This press release was originally published/issued: Tue, 21 Apr 2015 14:21:11 +0000

View More Education and Schools News
"Getting our students to not only think about college, but to engage in the level of work needed to successfully prepare for, and navigate their way into college will require a cultural shift," says Laura Hickson, Florence County School District 3 superintendent.

ABOUT THE NEWS SOURCE:
Foundation for Ensuring Access and Equity

The Foundation for Access and Equity provides research, guidance, and programs for the purpose of widening the primary to postsecondary pathway to college for underserved and underrepresented students. Through partnerships with faith-based organizations, school districts, and community organizations such as the Turner Chapel AME Church in Marietta, Georgia, the Los Angeles County Office of Education, the Region VII Education Service Center in Kilgore, Texas, and juvenile detention centers and camps, we are inspiring students, enlightening parents, and assisting agencies and organizations in closing the well-researched “college knowledge gap.”

RSS News Feed for Foundation for Ensuring Access and Equity

LEGAL NOTICE AND TERMS OF USE: The content of the above press release was provided by the “news source” Foundation for Ensuring Access and Equity or authorized agency, who is solely responsible for its accuracy. Send2Press® is the originating wire service for this story and content is Copr. © Foundation for Ensuring Access and Equity with newswire version Copr. © 2015 Send2Press (a service of Neotrope). All trademarks acknowledged. Information is believed accurate, as provided by news source or authorized agency, however is not guaranteed, and you assume all risk for use of any information found herein/hereupon.