"Our study confirms that states without prevailing wage laws not only undermine workmanship, productivity, and workforce development programs that promote construction career pathways for racial minorities and veterans, but millions more is spent in these states on food stamps..." says study co-author Kevin Duncan.

The Report, entitled “The Economic, Fiscal, and Social Impacts of State Prevailing Wage Laws: Choosing Between the High Road and the Low Road in the Construction Industry,” utilizes industry standard IMPLAN modeling software and industry comparisons between states with and without prevailing wage laws to assess the impact of these policies on a variety of economic and social factors: including job creation, wages, worksite productivity, rates of in-state contracting, impacts on taxpayers, reliance on government assistance programs, and effects on communities of color and veterans.

A Fact Sheet Summarizing the Report’s Findings May be Found Here: http://www.smartcitiesprevail.org/wp-content/uploads/2016/02/Report-Fact-Sheet-for-the-Impacts-of-State-Prevailing-Wage-Laws.2016FINAL.pdf.

The Full Report May be Downloaded Here: http://www.smartcitiesprevail.org/wp-content/uploads/2016/02/PW-national-impact-study-FINAL2.9.16.pdf.

“Our study confirms that states without prevailing wage laws not only undermine workmanship, productivity, and workforce development programs that promote construction career pathways for racial minorities and veterans, but millions more is spent in these states on food stamps, EITC (Earned Income Tax Credit), and public forms of insurance for low income blue-collar construction workers, with smaller overall economic output, higher income inequality, and millions less in tax revenue,” said study co-author and Colorado State University Economist Kevin Duncan. “If all the states with prevailing wage laws in place were to repeal, they could expect to see similar trends, with 400,000 lost jobs, a $65 billion reduction in our national economy, and a loss of $8 billion in tax revenue.”

The report also examines – for the first time – the existing body of research that has been presented on both sides of the issue related to the impact of prevailing wage policies on overall project costs. In doing so, it makes an important distinction between research that has undergone peer review, and that which has not, concluding that 75 percent of recent peer-reviewed studies find that construction costs are not affected by prevailing wages.

“Our research shows that the debate around the cost impact of prevailing wage policies, in many ways, mirrors the debate on policy questions like climate change – where some policy makers rely on ideological bias or an incomplete understanding of an industry to promote conclusions that are simply not supported by academic consensus,” said study co-author Alex Lantsberg. “We found that the non-peer reviewed studies that suggest cost savings from prevailing wage repeal tend to focus exclusively on wage differences, which ignore the fact that prevailing wage standards dramatically reduce material and fuel expenditures and reliance on taxpayer-funded welfare assistance, while increasing worksite productivity.”

While Wisconsin voted to severely weaken its prevailing wage standard, California moved to strengthen its laws and a citizen petition to force a repeal in Michigan failed. Proponents of repeal in Michigan have vowed to mount a similar petition drive again in 2016.

“In many ways, our research shows why state-level prevailing wage standards were first introduced by Republicans, and have long enjoyed bi-partisan support from leaders as ideologically diverse as California Governor Jerry Brown and Speaker of the House Paul Ryan,” added study co-author Frank Manzo IV. “To be sure, there are financially motivated interests on both sides of this issue, but the facts clearly argue for prevailing wage policies as the best bet for taxpayers, workers, businesses, and the economy as a whole.”

The Illinois Economic Policy Institute is a non-partisan research and education nonprofit focused on issues affecting Illinois and the Midwest, including infrastructure investment and the construction industry. Learn more at http://illinoisepi.org/ or follow us on Twitter at https://twitter.com/IllinoisEPI.

Smart Cities Prevail is a leading construction industry research and educational organization, specializing in studying the costs and benefits of prevailing wage policies. Learn more at http://www.smartcitiesprevail.org/ – or follow us on https://www.facebook.com/SmartCitiesPrevail and https://twitter.com/cacitiesprevail.

Dr. Kevin Duncan, Ph.D. is a Professor of Economics in the Hasan School of Business at Colorado State University – Pueblo and Senior Economist at BCD Economics, LLC. Over the last 30 years, Duncan has become one of the nation’s foremost experts on the impact of prevailing wage policies, testifying before numerous legislative committees, advising government agencies, and publishing dozens of peer reviewed studies and over 40 public policy papers on the subject. 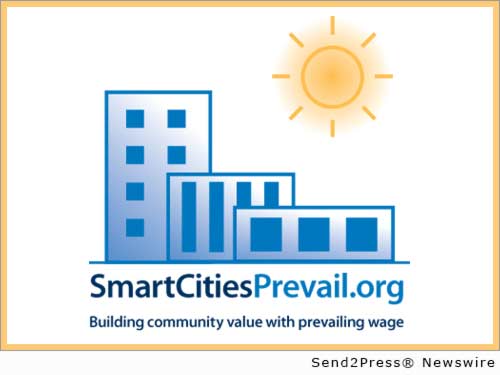 NEWS ARCHIVE NOTE: this archival news content, issued by the news source via Send2Press Newswire, was originally located in the Send2Press® 2004-2015 2.0 news platform and has been permanently converted/moved (and redirected) into our 3.0 platform. Also note the story “reads” counter (bottom of page) does not include any data prior to Oct. 30, 2016. This press release was originally published/issued: Tue, 09 Feb 2016 16:17:28 +0000

LEGAL NOTICE AND TERMS OF USE: The content of the above press release was provided by the “news source” Smart Cities Prevail or authorized agency, who is solely responsible for its accuracy. Send2Press® is the originating wire service for this story and content is Copr. © Smart Cities Prevail with newswire version Copr. © 2016 Send2Press (a service of Neotrope). All trademarks acknowledged. Information is believed accurate, as provided by news source or authorized agency, however is not guaranteed, and you assume all risk for use of any information found herein/hereupon.