SACRAMENTO, Calif., May 18, 2017 (SEND2PRESS NEWSWIRE) — In an open letter that ran as a full page ad in today’s Sacramento Bee, elected leaders from six of California’s eight largest cities called on California Governor Jerry Brown and the State Legislature to include prevailing wage standards in state housing reforms. The ad was paid for by Smart Cities Prevail (SCP). 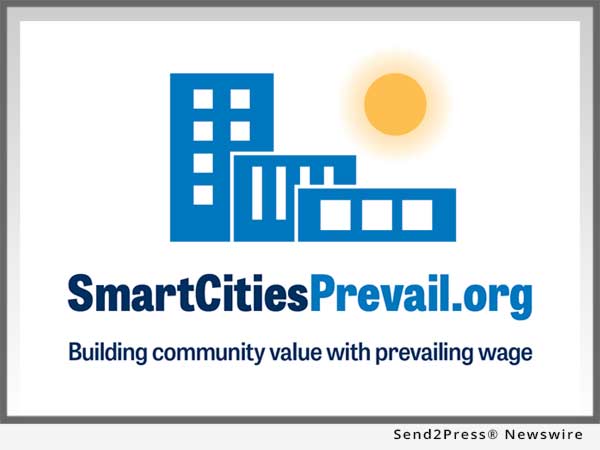 Smart Cities Prevail (SCP) is a non-profit research organization that focuses on wage policies and contracting standards in the construction industry. The ad was signed by a group of local elected officials from the cities of San Diego, Los Angeles, San Jose, San Francisco, Oakland, and Sacramento.

“Real housing reform needs to do more than simply streamline more development,” the leaders write. “We need to promote investment in the people who are doing the building, and struggling to pay the rent in our communities.”

Utilizing Economic Census data and industry standard data analysis, this study highlights how a variety of factors are contributing to California’s housing affordability crisis—including significant increases in profits for developers and builders, shrinking wages for blue-collar construction workers, and declining productivity for the construction industry as a whole. It concludes that including prevailing wage standards in state housing reforms would help the industry attract and develop the skills needed to boost housing supply, while also helping to close the affordability gap for working families, reducing racial disparities in pay, and saving taxpayers tens of millions of dollars per year by reducing reliance on public assistance.

“With real blue-collar construction wages down 25 percent over the last two decades, the suggestion that labor costs hinder the construction of more housing supply is simply not supported by the facts or the financial realities of the industry,” said study author Alex Lantsberg. “With housing prices and profits soaring, the industry is well positioned to invest in productivity and affordability for its own workforce. We can make good progress towards both objectives by incorporating prevailing wage standards into state housing reforms.”

Smart Cities Prevail has also posted today’s open letter online. Members of the public who want to lend their voice in support of including prevailing wage in state housing reforms can do so at: http://www.smartcitiesprevail.org/housingpetition/.

Smart Cities Prevail is a leading national non-profit research and education organization focused on the construction industry. Learn more at http://www.smartcitiesprevail.org, or by following us on Facebook (https://www.facebook.com/SmartCitiesPrevail) or Twitter (https://twitter.com/cacitiesprevail).

View More Construction and Building News
“With real blue-collar construction wages down 25 percent over the last two decades, the suggestion that labor costs hinder the construction of more housing supply is simply not supported by the facts or the financial realities of the industry,” said study author Alex Lantsberg.

LEGAL NOTICE AND TERMS OF USE: The content of the above press release was provided by the “news source” Smart Cities Prevail or authorized agency, who is solely responsible for its accuracy. Send2Press® is the originating wire service for this story and content is Copr. © Smart Cities Prevail with newswire version Copr. © 2017 Send2Press (a service of Neotrope). All trademarks acknowledged. Information is believed accurate, as provided by news source or authorized agency, however is not guaranteed, and you assume all risk for use of any information found herein/hereupon.