"Comparing data from prevailing wage and non-prevailing wage states shows repeal of the standard in Michigan will be a bad bargain for taxpayers," said study co-author Frank Manzo of the Midwest Economic Policy Institute.

The study uses a growing body of peer reviewed research, data from the Economic Census of Construction, and industry standard IMPLAN software to analyze the impact of prevailing wage standards on overall project costs and model the economic impact of spending shifts that would result from repeal of Michigan’s prevailing wage law. These spending shifts ultimately impact job creation, as well as local and state tax revenue and rates of in-state contracting.

“Comparing data from prevailing wage and non-prevailing wage states shows repeal of the standard in Michigan will be a bad bargain for taxpayers,” said study co-author Frank Manzo of the Midwest Economic Policy Institute. “There are no savings because reductions in construction wages are offset by decreases in workforce productivity, less worksite efficiency, and increased spending on energy and materials.”

The study also demonstrates a significant economic “ripple effect” that would result from repeal. Not just from lower wages and less spending by Michigan’s construction workers, but also because non-prevailing wage states utilize more out-of-state contractors.

“Every sector of the economy would feel the impact of prevailing wage repeal,” said study Co-Author and Colorado State University Economist Kevin Duncan. “This would be a self-inflicted wound that suppresses economic activity, exports hundreds of millions of construction dollars out of state, and puts thousands of people out of work.”

Dr. Duncan noted that these impacts would ultimately create additional burdens for state and local government, and by extension, Michigan’s taxpayers.

“Less economic activity and fewer people working for lower wages translates to more reliance on public assistance programs and lower tax revenues,” Duncan added. “There are only two ways to close that gap-raising taxes or making even deeper cuts to vital public services.”

This is the third prevailing wage economic impact study in as many months that Dr. Duncan has co-authored, along with Smart Cities Prevail Researcher Alex Lantsberg.

“There is a reason why prevailing wage policies have stood the test of time and have long been embraced by leaders in both political parties-including Michigan’s Republican Governor Rick Snyder,” added Lantsberg. “Our goal is to ensure that voters and policy makers have the facts they need to make informed decisions that reflect the best interests of taxpayers and the economy as a whole-and our research shows that repeal of prevailing wage falls far short of that standard.”

Recent polling shows that Michigan’s prevailing wage law is supported by 60% of voters, including a majority of Democrats and Independents and a plurality of Republicans.

Kevin Duncan, Ph.D. is a Professor of Economics in the Hasan School of Business at Colorado State University – Pueblo and Senior Economist at BCD Economics, LLC.

Alex Lantsberg, MCP, AICP is a Researcher with Smart Cities Prevail and a member of the American Institute for City Planning.

The Midwest Economic Policy Institute is a non-profit, non-partisan research and education organization focused on issues affecting Midwestern economies, including infrastructure investment and the construction industry. Learn more at http://illinoisepi.org/midwest-economic-policy-institute/. 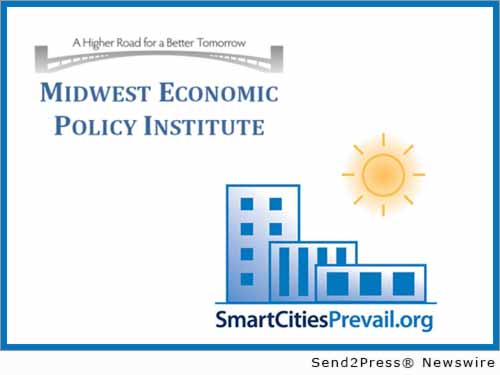 NEWS ARCHIVE NOTE: this archival news content, issued by the news source via Send2Press Newswire, was originally located in the Send2Press® 2004-2015 2.0 news platform and has been permanently converted/moved (and redirected) into our 3.0 platform. Also note the story “reads” counter (bottom of page) does not include any data prior to Oct. 30, 2016. This press release was originally published/issued: Mon, 29 Jun 2015 08:00:42 +0000

LEGAL NOTICE AND TERMS OF USE: The content of the above press release was provided by the “news source” Smart Cities Prevail or authorized agency, who is solely responsible for its accuracy. Send2Press® is the originating wire service for this story and content is Copr. © Smart Cities Prevail with newswire version Copr. © 2015 Send2Press (a service of Neotrope). All trademarks acknowledged. Information is believed accurate, as provided by news source or authorized agency, however is not guaranteed, and you assume all risk for use of any information found herein/hereupon.