LAKEVILLE, Conn., Sept. 14, 2015 (SEND2PRESS NEWSWIRE) — Lime Rock Park presented one very special trophy as part of its “Sunday in the Park” concours d’elegance over the Labor Day weekend, this one to Frank Nicodemus of Wappinger’s Falls, N.Y. in honor of his fiftieth year in restoring vintage cars.

While Nicodemus is best known for his Cadillac restorations – he’s considered by many the nation’s premier restoration expert of that Detroit marque – his skills haven’t been limited to just “Caddies” alone. Among the cars he brought to show at Lime Rock was a Shelby Cobra replica, and there’s a Porsche 356 sitting on his shop floor at Castle Cadillac.

Larry Printz, one of the concours judges, noted in announcing the award that Frank’s most famous restoration may have been of the 1955 El Dorado Biarritz convertible which was borrowed by the Rolling Stones to promote their “Bridges to Babylon” tour.

Nicodemus waited patiently for 15 years after first seeing it until its owner, a magazine editor, was willing to part with it. Ken Bain, the organizer of the concours and one of the show judges who joined in the award presentation, noted that one of the most popular displays at the show was that of five rare Cadillacs brought there by Nicodemus, but in light of the award, these weren’t up for ribbons because in light of the Golden Anniversary award, they were shown hors concours (without honors).

Even so, two of the class winners for the day were Frank Nicodemus restorations.

“And next year I’ll be back as a competitor,” Nicodemus promised. 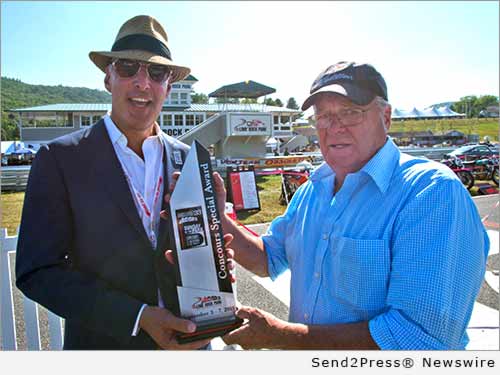 NEWS ARCHIVE NOTE: this archival news content, issued by the news source via Send2Press Newswire, was originally located in the Send2Press® 2004-2015 2.0 news platform and has been permanently converted/moved (and redirected) into our 3.0 platform. Also note the story “reads” counter (bottom of page) does not include any data prior to Oct. 30, 2016. This press release was originally published/issued: Mon, 14 Sep 2015 17:13:24 +0000

LEGAL NOTICE AND TERMS OF USE: The content of the above press release was provided by the “news source” Castle Cadillac Restorations or authorized agency, who is solely responsible for its accuracy. Send2Press® is the originating wire service for this story and content is Copr. © Castle Cadillac Restorations with newswire version Copr. © 2015 Send2Press (a service of Neotrope). All trademarks acknowledged. Information is believed accurate, as provided by news source or authorized agency, however is not guaranteed, and you assume all risk for use of any information found herein/hereupon.