Some Things Are Better the Second Time Around

WAPPINGER FALLS, N.Y., Oct. 14, 2016 (SEND2PRESS NEWSWIRE) — Some things are worth celebrating twice, says Frank Nicodemus of Castle Cadillac Restorations in Wappinger Falls, New York. Like a hole in one at a PGA course. Or the time you scratched off that lottery ticket and – BINGO. One of those rare days when two cars prepared by the same local restorer, win their “senior badge” at the Antique Automobile Club of America at the same time. The calculated odds on this are about 3,000 to 1. 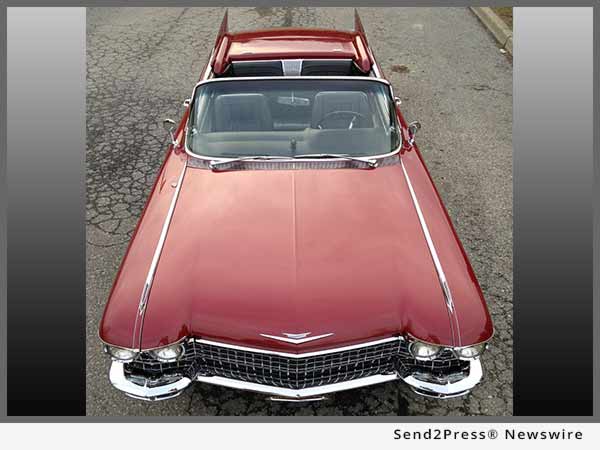 “Both Cadillacs won their Senior Badges at the recent AACA Hershey Fall Meet,” says Nicodemus, who with his business partner, Chris Semke, laid on the coats of paint and clear coat, made sure every bolt was the right one in the right place and shined the last piece of chrome on those cars. “But we were too busy restoring Cadillacs in our restoration facility to really celebrate with the owners, so we sat down with them the other night with a bottle of champagne.”

The AACA “Senior Badge” doesn’t look like much – it’s just a little metal plaque the diameter of a softball to be attached to the radiator – but it’s the highest award that can be bestowed by the oldest car club in the nation.

Jack Haverty’s 1960 Cadillac Eldorado Biarritz was eye candy for the judges; it was the rarity of the Pompeian Red and one of 99 bucket seat car from a limited production. Joe Kelley’s 1958 Cadillac Eldorado Biarritz painted Rajah Silver Metallic with its re-anodized Gold grill and flawless mirrored finish saber wheels pushed this car over the top.

Mr. Haverty and Mr. Kelley waited patiently while the lengthy restorations were painstakingly performed by Semke and Nicodemus and the team ensured the perfection of each car. The final product was an impeccable restoration worthy of Semke’s and Nicodemus’ worldwide reputation.

“We are currently restoring and planning to enter next year another 1960 Cadillac Eldorado Biarritz with rare bucket seats finished in Sienna Rose” Nicodemus said. “It will truly be a jaw-dropper.”

View More Automotive and Motorsports News
“Both Cadillacs won their Senior Badges at the recent AACA Hershey Fall Meet,” says Nicodemus. "But we were too busy restoring Cadillacs in our restoration facility to really celebrate with the owners, so we sat down with them the other night with a bottle of champagne."

LEGAL NOTICE AND TERMS OF USE: The content of the above press release was provided by the “news source” Castle Cadillac Restorations or authorized agency, who is solely responsible for its accuracy. Send2Press® is the originating wire service for this story and content is Copr. © Castle Cadillac Restorations with newswire version Copr. © 2016 Send2Press (a service of Neotrope). All trademarks acknowledged. Information is believed accurate, as provided by news source or authorized agency, however is not guaranteed, and you assume all risk for use of any information found herein/hereupon.