ATLANTA, Ga., April 8, 2021 (SEND2PRESS NEWSWIRE) — Despite the ongoing efforts of many leaders to suppress the voices of Georgia residents, Black and Brown voters turned out in record numbers, electing the most diverse leadership in the state’s history. Last week, the Georgia Coalition for the Peoples’ Agenda’s women’s network, Georgia Black Women’s Roundtable (BWR), took a short break from their fight against archaic voter suppression laws to recognize the historic leadership of local Black women during a virtual event, “Celebrating Valiant Women of the Vote: Refusing to Be Silenced.” 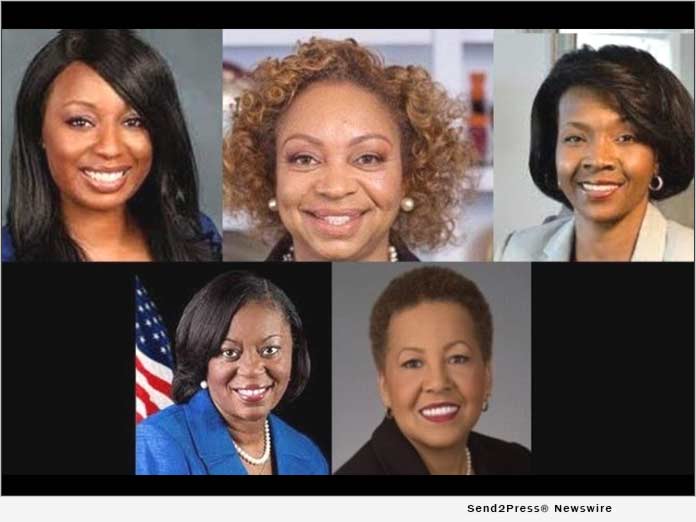 “Black women have worked extremely hard over the past year to make sure every eligible voter was able to cast a ballot that counted without fear or intimidation,” said Helen Butler, executive director of the Georgia Coalition for the Peoples’ Agenda. “We wanted to take a moment to recognize the impact their service has had on our community, locally and nationally.”

The first valiant woman of the vote, Dekalb County Commissioner Mereda Johnson, was elected to serve District 5 in 2015. A co-founding partner with the law firm of Johnson Hopewell Coleman, Commissioner Johnson has been a practicing attorney for more than 33 years, concentrating in family law. In 1985, she became the first Black female judge appointed in DeKalb County Courts.

“I decided to be a part of the change I wanted to see in Dekalb,” said Commissioner Johnson. “Everyday I wake up to serve my neighbors and try to improve the quality of life in my community.”

Gwinnett County Commissioner Nicole Love Hendrickson was elected chair of the Board of Commissioners in 2020, making her the first African American to hold this position. She was the founding director of the Gwinnett County Community Outreach program where she launched several community-based initiatives and has served on the boards of the United Way Gwinnett Community and the Georgia Hispanic Chamber of Commerce.

Elected in 2020, Henry County Commissioner Carlotta Harrell is the daughter of a pastor and a freedom fighter. She is a managing partner and VP of Business Development with The Harrell Group, a women-owned consulting firm. Commissioner Harrell served as chief of staff for the Henry County Commissioner in District V and was a consultant for the Georgia Conference of African American Mayors, assisting mayors and cities with identifying over $300 million dollars in funding for infrastructure and economic development projects.

Prior to being sworn in as the county’s first Black and first woman chairperson, Cobb County Commissioner Lisa Cupid served on the Board of Commissioners for eight years representing District Four. Commissioner Cupid is an attorney and former mediator, policy analyst and manufacturing process engineer. She is known as a strong advocate for the fair treatment of all of Cobb’s residents and stakeholders regardless of geographic, demographic or economic standing. Her accomplishments include championing Cobb’s newly instituted Sunday transit service and advocating for enhanced public safety measures.

The Rita Jackson Samuels Trailblazer Award was given to Felicia M. Davis, the co-founder of HBCU Green Fund and convener of Clayton County Black Women’s Roundtable. Davis has been a staunch advocate for climate justice and spent just as much time promoting voting. Mentored by renowned civil rights leader, Dr. Joseph E. Lowery, Davis has led voter registration, education and mobilization initiatives locally and nationally. She serves on the board of the National Coalition on Black Civic Participation and was a partner with the late Rita Samuels in Women Flying High, a business devoted to increasing women’s participation in Atlanta airport contracts.

“My friend, Dr. Rita Jackson Samuels, would be so proud of the historic number of Black women elected officials in Georgia,” said Davis. “Rita dedicated her life to women’s empowerment, especially getting Black women elected. Today we’re leading in Clayton, Cobb, Gwinnett, Dekalb, Henry and Douglas Counties, and throughout the state.”

Dr. Samuels was a civil and women’s right’s visionary who worked alongside some of the most powerful leaders in the country including Dr. Martin Luther King, Jr. She became the first Black woman in Georgia’s history to serve on the staff of a Georgia Governor and went on to serve in the staff of President Jimmy Carter.

The Georgia Coalition for the Peoples’ Agenda ( http://thepeoplesagenda.org/ ) is proud to promote health, wealth, and economic prosperity for women through Georgia Black Women’s Roundtable, an affiliate of the National Coalition on Black Civic Participation’s Black Women’s Roundtable (blackwomensroundtable.org); an intergenerational leadership development, mentoring, and empowerment arm for Black women and girls that stays at the forefront of championing justice and equitable public policies.

View More Elections and Politics News
"Black women have worked extremely hard over the past year to make sure every eligible voter was able to cast a ballot that counted without fear or intimidation," said Helen Butler, executive director of the Georgia Coalition for the Peoples' Agenda.

More from Georgia Coalition for the Peoples Agenda

ABOUT THE NEWS SOURCE:
Georgia Coalition for the Peoples Agenda

The Georgia Coalition for the Peoples' Agenda is a nonprofit, nonpartisan organization performing year-round voter registration, education and mobilization in Black communities throughout Georgia. Led by board chair, Rev. J. A. Milner, the organization has headquarters in Atlanta and offices in Athens, Albany, Macon, Augusta, LaGrange and Savannah.

RSS News Feed for Georgia Coalition for the Peoples Agenda

LEGAL NOTICE AND TERMS OF USE: The content of the above press release was provided by the “news source” Georgia Coalition for the Peoples Agenda or authorized agency, who is solely responsible for its accuracy. Send2Press® is the originating wire service for this story and content is Copr. © Georgia Coalition for the Peoples Agenda with newswire version Copr. © 2021 Send2Press (a service of Neotrope). All trademarks acknowledged. Information is believed accurate, as provided by news source or authorized agency, however is not guaranteed, and you assume all risk for use of any information found herein/hereupon.