"Our longevity in reaching a decade of success speaks volumes about the effectiveness of our technology platform and the second-to-none service we provide our clients," commented Vladimir Bien-Aime, president and CEO of Global DMS.

LANSDALE, Pa., March 6, 2013 (SEND2PRESS NEWSWIRE) — Global DMS, the leading provider of Web-based compliant valuation management software, today announced the celebration of its tenth anniversary in business. The Global DMS name was officially formed in 2003 and the company has remained dedicated to the mortgage banking industry and appraisal management space since its inception.

“Our longevity in reaching a decade of success speaks volumes about the effectiveness of our technology platform and the second-to-none service we provide our clients,” commented Vladimir Bien-Aime, president and CEO of Global DMS. “To date, we have helped hundreds of organizations automate their valuation management processes and bring newfound efficiencies to complex workflows. We credit our continued success to our two greatest assets-our valued clients and our highly dedicated staff, which in part is why we boast a 100 percent customer retention rate.”

Global DMS originally started as OneStopAppraisal . com in 1999 but as the company expanded its solution offering and client base, its focus shifted and was later officially launched as Global DMS in 2003. The company currently employs 40 employees and will be adding more staff throughout 2013.

Global DMS has been growing at an enviable rate and has been adding new software developers, business analysts, support analysts, implementation managers, quality assurance specialists, salespeople and new executives to support its expansion. The company recently relocated its headquarters to a larger building located in the greater Philadelphia metropolitan area to house the new hires.

Notable is that Global DMS is consistently voted a Top 50 Servicer Provider by Mortgage Technology magazine and in 2011 the company was named to the Inc. Magazine’s Inc. 5000 list with a ranking of 1101 and a three-year growth rate of 273 percent.

About Global DMS:
Founded in 1999 and headquartered in Lansdale, Pennsylvania, Global DMS is the mortgage industry’s preeminent provider of commercial and residential real estate valuation solutions catering to lenders, servicers, AMCs, appraisers and other real estate entities. The company’s solution set is cost effectively delivered on a software-as-service (SaaS) transactional basis that ensures compliance adherence, reduces costs, increases efficiencies and expedites the entire real estate appraisal process. Notable is that Global DMS has retained 100 percent of its lender clients since its inception. 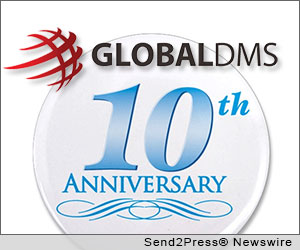 NEWS ARCHIVE NOTE: this archival news content, issued by the news source via Send2Press Newswire, was originally located in the Send2Press® 2004-2015 2.0 news platform and has been permanently converted/moved (and redirected) into our 3.0 platform. Also note the story “reads” counter (bottom of page) does not include any data prior to Oct. 30, 2016. This press release was originally published/issued: Wed, 06 Mar 2013 07:55:01 +0000

View More Banking News
"Our longevity in reaching a decade of success speaks volumes about the effectiveness of our technology platform and the second-to-none service we provide our clients," commented Vladimir Bien-Aime, president and CEO of Global DMS.

ABOUT THE NEWS SOURCE:
Global DMS

LEGAL NOTICE AND TERMS OF USE: The content of the above press release was provided by the “news source” Global DMS or authorized agency, who is solely responsible for its accuracy. Send2Press® is the originating wire service for this story and content is Copr. © Global DMS with newswire version Copr. © 2013 Send2Press (a service of Neotrope). All trademarks acknowledged. Information is believed accurate, as provided by news source or authorized agency, however is not guaranteed, and you assume all risk for use of any information found herein/hereupon.