Happiness Is Something Worth Sharing Says Madrid-Based Scientology Foundation

MADRID, Spain, April 5, 2022 (SEND2PRESS NEWSWIRE) — Volunteers from the Scientology Churches and Missions of Spain and the nonprofit Fundacion Mejora reach out to their communities with The Way to Happiness to improve the quality of life. 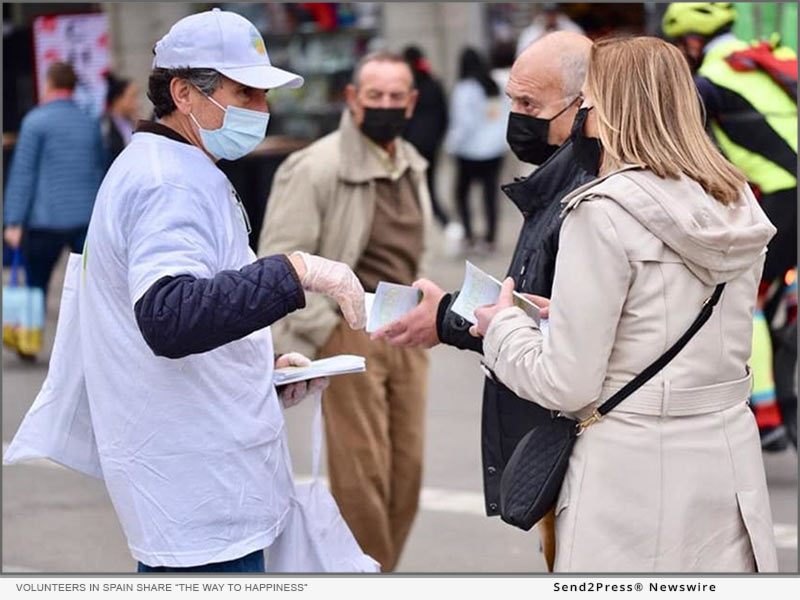 PHOTO CAPTION: Volunteers in Spain share “The Way to Happiness” to help others improve the quality of their lives.

“True joy and happiness are valuable,” begins The Way to Happiness, a common-sense guide to better living, written by author, humanitarian and Scientology Founder L. Ron Hubbard in 1981.

Some 200 years earlier, Thomas Jefferson penned the Declaration of Independence including the pursuit of happiness as an unalienable right.

And in 2011, the UN General Assembly echoed these concepts by adopting a resolution recognizing happiness as a “fundamental human goal.”

But is there a way to achieve happiness — a tool by which anyone may guarantee or improve his or her chances of benefiting from this cherished state? That is the purpose of The Way to Happiness and the reason the booklet has inspired an international movement.

“Happiness lies in engaging in worthwhile activities,” wrote Mr. Hubbard in the epilogue of The Way to Happiness, a book containing 21 basic principles or precepts that “point the way to a less dangerous and happier life.” So on International Day of Happiness, the Mejora Foundation and volunteers from Scientology Churches and Missions of Spain joined Scientologists and like-minded people the world over who marked the day by sharing this booklet in their neighborhoods and the busy streets of their cities.

They encouraged those they shared the booklet with to give copies to friends whose happiness is important to them. And they invited them to take a free online course on The Way to Happiness Foundation website.

Episodes show how the booklet helped:

Foundacion Mejora (Foundation for the Improvement of Life, Culture and Society) was established in 2015 by the Church of Scientology of Spain. It is registered in that country’s National Registry of Foundations. And in 2019 it achieved consultive status to the United Nations Economic and Social Council, ECOSOC, one of the six principal organs of the United Nations.

The National Church of Scientology of Spain was dedicated in 2004 by Scientology ecclesiastical leader Mr. David Miscavige. It is an Ideal Scientology Church, located in the heart of Madrid. It is configured to service Scientologists in their ascent to spiritual freedom and serve as a home for the entire community—a meeting ground of cooperative effort to uplift citizens of all denominations.

Caption: Volunteers in Spain share The Way to Happiness to help others improve the quality of their lives.