Send2Press › Wire › Entertainment › Movies and Filmmaking › Heart of Christmas: One Gift Bears Another

Heart of Christmas: One Gift Bears Another

At age 9, Ben Tinsley became a participant and contributor to the annual Fort Worth Christmas pageant, 'The Littlest Wiseman.'

FORT WORTH, Texas, Aug. 15, 2016 (SEND2PRESS NEWSWIRE) — “Heart of Christmas, The Secret History of The Littlest Wiseman,” a gift film that pays tribute to philanthropists Mary D. and F. Howard Walsh, will premiere Sept. 7, 2016 at the Modern Art Museum of Fort Worth. At age 9, Ben Tinsley became a participant and contributor to the annual Fort Worth Christmas pageant, “The Littlest Wiseman.” 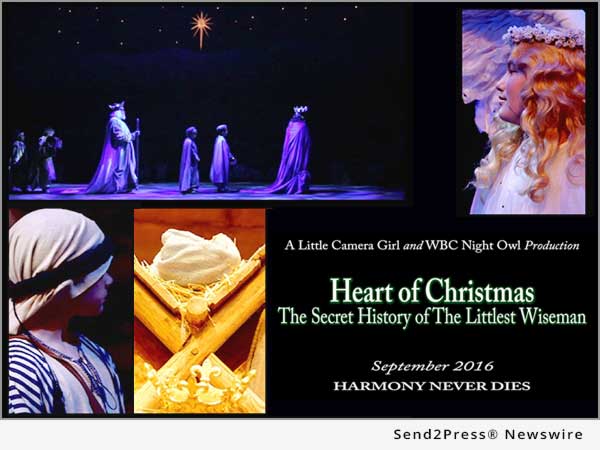 Forty years later, the local journalist has created a film as a tribute to production founders Mary D. & F. Howard Walsh. The movie, free to the public, premieres Sept. 7.

Ben Tinsley, a North Texas journalist and long-time participant and contributor to the annual “Play Pageant of the Nativity,” wrote, directed and co-produced “Heart of Christmas” “because I felt the need to capture the incredible impact the Walshes had on generations of families that participated or attended ‘The Littlest Wiseman.’”

Through performances and interviews, Tinsley’s 57-minute film captures the essence of “The Littlest Wiseman,” which will be produced for the 56th year in December. Admission to the nine performances is free – as it always has been – courtesy of The Walsh Foundation.

Tinsley was a member of the Texas Boys Choir between ages 9 and 11 and performed in the Christmas play twice.

“I found it amazing that these Texas Boys Choir alums could be performing at ‘The Littlest Wiseman’ once more,” Tinsley said. “I really didn’t think this was even a possibility for me to ever do again.”

During rehearsals, Tinsley began to realize much of what is great about “The Littlest Wiseman” production was fading. Mary D. and F. Howard Walsh had passed away. Composer Jack Noble White, formerly of the Texas Boys Choir, was aging. And the presence of the Texas Boys Choir was gone. Tinsley concluded that great memories were not adequately being preserved.

Dallas-Fort Worth area movie director Dan Millican introduced Tinsley to some colleagues and allowed them to use his camera equipment to shoot the documentary. Alicia Pascual, Tinsley’s director of cinematography, filmed “Heart Of Christmas” during a three-day period in December 2015. The project took film editor Christine Copeland roughly a month to edit.

“Heart Of Christmas: The Secret History of The Littlest Wiseman” premieres in the movie theatre at the Modern Art Museum of Fort Worth, 3200 Darnell Street, at 6 p.m. Wednesday, Sept. 7, 2016. Admission is free. Tickets will not be needed for admission.

After the premiere, the link to the movie will be available for free viewing online.

View More Movies and Filmmaking News
"I found it amazing that these Texas Boys Choir alums could be performing at 'The Littlest Wiseman' once more," Tinsley said. "I really didn't think this was even a possibility for me to ever do again."

ABOUT THE NEWS SOURCE:
Ben Tinsley

Ben Tinsley basically grew up in and around a Fort Worth, Texas newsroom. He has worked over 25 years as an "in the trenches" hard news reporter at newspapers in over four states. During that time, he also has worked in journalism mediums such as television and radio. Tinsley specializes in crime and criminal justice coverage — but he has worked every beat a newsroom has to offer. Tinsley, a long-time participant and contributor to the annual North Texas "Play Pageant of the Nativity," wrote, directed and co-produced "Heart of Christmas, The Secret History of The Littlest Wiseman."

LEGAL NOTICE AND TERMS OF USE: The content of the above press release was provided by the “news source” Ben Tinsley or authorized agency, who is solely responsible for its accuracy. Send2Press® is the originating wire service for this story and content is Copr. © Ben Tinsley with newswire version Copr. © 2016 Send2Press (a service of Neotrope). All trademarks acknowledged. Information is believed accurate, as provided by news source or authorized agency, however is not guaranteed, and you assume all risk for use of any information found herein/hereupon.