WANGA PARISH, Uganda and LOS ANGELES, Calif., Nov. 29, 2022 (SEND2PRESS NEWSWIRE) — International Volunteer Day December 5 was set aside by the United Nations to celebrate positive change through volunteerism. And a stellar example of the change a team of volunteers can achieve is the work of the Volunteer Ministers of Wanga Parish, Uganda, says the Church of Scientology International. 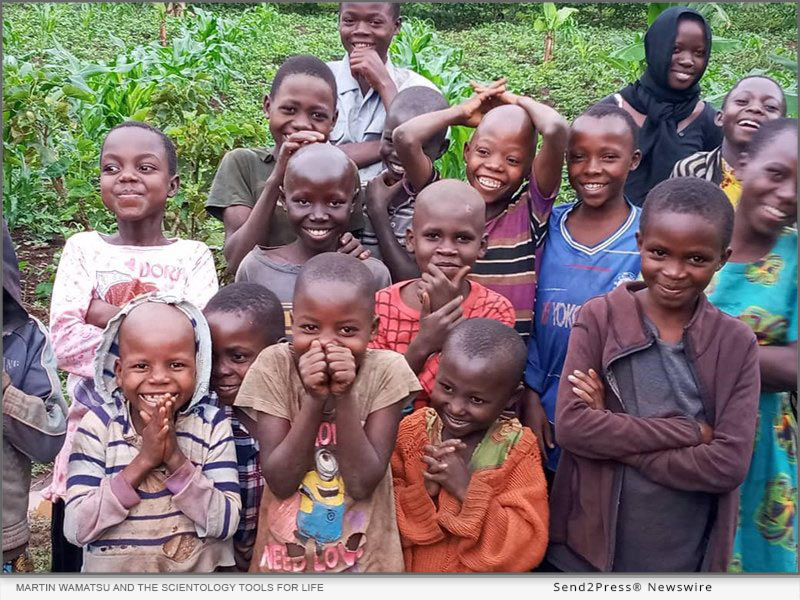 Photo Caption: There is every reason to be optimistic as a child in Wanga Parish, Uganda, as the village approaches sustainability thanks to Martin Wamatsu and the Scientology Tools for Life.

Martin Wamatsu had a dream: to transform Wanga Parish, the village of his birth, from a community struggling in poverty to one that is self-sustaining and providing a decent future for all who live there.

When he was introduced to the Scientology Volunteer Ministers’ Tools for Life Courses online, he realized this was the technology he needed to turn his dream into reality. Understanding the basics of communication, organization and planning, he now knew how to set goals and accomplish them. Wamatsu and his family returned to the village, met with village elders, and gained their agreement to carry out a series of programs to achieve this goal.

Wamatsu reached out to a Scientologist over the internet who was as excited about his ideas and plans as he was, and she took on raising funds for the project.

As a school principal, one of Wamatsu’s first projects was to provide a future for 70 destitute village orphans. He and his team opened an orphanage, and these children are now all in school. The children now have the energy to learn and take part in orphanage projects. And once the children harvest their first crop of sweet potatoes and rice, the orphanage will be self-sustaining.

Another 25 destitute village children have received the same kind of help and have joined their orphaned friends in school. Funds are nearly in place for the remaining 45 village children to also join them at the school, which will accomplish one of Wamatsu’s goals: universal education for all village children.

During the 84-week COVID lockdown in Uganda, most people had to resort to eating their seeds to survive. With the help of his online patron, Wamatsu has now seen to the purchase of seeds, and the village has planted 15 acres of rice, and fields of sweet potatoes and cassava. Once these harvests are gathered, they will have enough to feed the village, plant for the next season and sell or trade produce to nearby villages.

The village and six other villages nearby now have pure, clean drinking water. And they are raising funds to open a medical clinic with a nurse who is also a trained Scientology Volunteer Minister.

Wamatsu has trained his entire village and the leaders of 24 nearby villages on the Scientology Tools for Life. And they used these tools to organize themselves to work as a team to accomplish targets. They are well on their way to making Wanga a sustainable village that can serve as a model where nearby leaders can gain practical experience and return to their villages to create a sustainable region and beyond.

CAPTION: There is every reason to be optimistic as a child in Wanga Parish, Uganda, as the village approaches sustainability thanks to Martin Wamatsu and the Scientology Tools for Life.