PHOTO CAPTION: Ryan Chernin, a multitalented indie-rock singer-songwriter who is a guitar virtuoso, as well as a designer and crafter of custom guitars.

His debut single also climbed to 24 on Digital Radio Tracker’s Top 150. These two chart-notching achievements for the 25-year-old musician are almost unheard-of for a new indie artist and intimate the likelihood of another remarkable success for “FaceTime.”

The moving new release should resonate with a large audience

It tells of a young man who longs for FaceTime with a woman he loves, but when he is finally face to face with her, he finds himself with the crushing realization that he is at a loss for words.

Both songs are taken from his meticulously crafted debut album

Chernin’s first chart-climbing song and promising new release are both taken from his striking debut album, “You Know Who You Are,” an evocative collection of daringly introspective songs about the uncertainties and questions we all experience in love and loss. The captivating storytelling and deeply felt observations are presented in Chernin’s distinctive stylistic blend of folk music inspired by the signature sounds of the 60s and 70s and by contemporary indie rock.

The songs are punctuated with unpredictable excursions and insights reminiscent of Paul Simon in such classic songs as “The Sounds of Silence.”

Ryan explained the meticulous work that went into the debut album: “What was most important to us was to take our time with it and really make sure it was perfect every step of the way. It was about selecting the right people.” The right people embraced producer John Eugenio, Chris Davies doing the mixing, and fellow guitarist Jared Scharff from SNL.

Chernin’s commanding singing voice and guitar wizardry weaves perfectly with the raw insight of his lyrics, which span the emotional spectrum from dark self-reflection to danceable celebrations. His inviting pop-rock vocal style demonstrates a stunning range, as he moves smoothly between his evocative falsetto and his sometimes soaring, sometimes almost ineffably expressive baritone.

The indie label Inhuman Records, which released his debut album and two singles from it, is a Brooklyn-based art collective founded by Ryan Chernin. It brings together talented friends and artists and explores their exciting opportunities to collaborate. 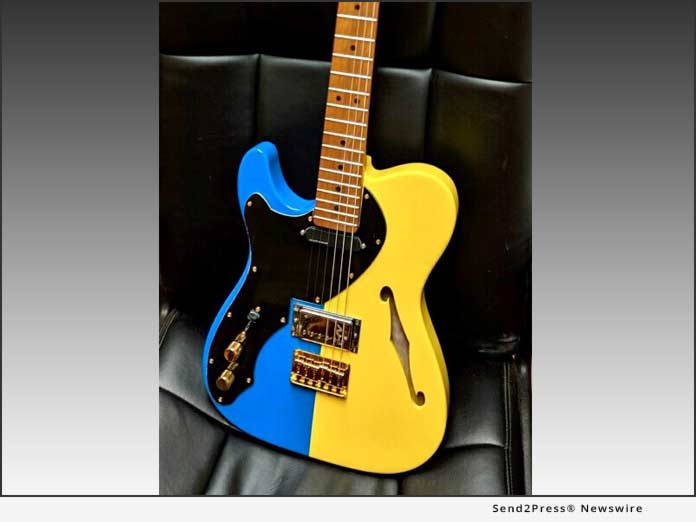 Chernin is a multi-faceted artist who, in the tradition of guitar virtuosos like Les Paul and Van Halen, designs and builds his own guitars and custom guitars by order. He recently refused payment for a custom guitar ordered by a California forest fireman for his son, instead gifting it to him to express appreciation for the selfless and dangerous work he and his fellow firefighters perform.

Listen to the touchingly eloquent and masterful folk-influenced pop-rock songs of Ryan Chernin.

For more information about Ryan Chernin, visit his website at https://www.ryanchernin.com

IMAGE Links for Media:
[1] https://www.Send2Press.com/300dpi/19-0911s2p-ryan-chernin-300dpi.jpg
Caption: Ryan Chernin, a multitalented indie-rock singer-songwriter who is a guitar virtuoso, as well as a designer and crafter of custom guitars.

View More Music and Recording News
"What was most important to us was to take our time with it and really make sure it was perfect every step of the way. It was about selecting the right people," says Chernin.

LEGAL NOTICE AND TERMS OF USE: The content of the above press release was provided by the “news source” Inhuman Records or authorized agency, who is solely responsible for its accuracy. Send2Press® is the originating wire service for this story and content is Copr. © Inhuman Records with newswire version Copr. © 2019 Send2Press (a service of Neotrope). All trademarks acknowledged. Information is believed accurate, as provided by news source or authorized agency, however is not guaranteed, and you assume all risk for use of any information found herein/hereupon.