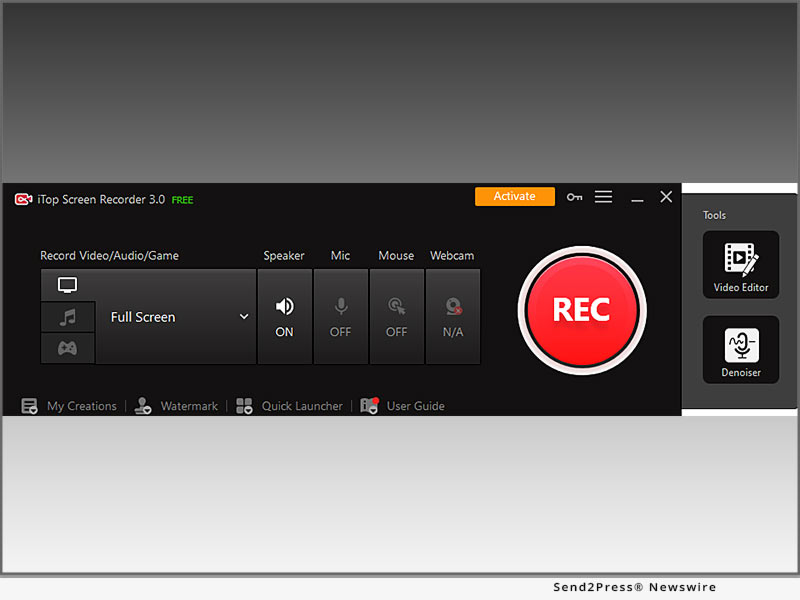 iTop Screen Recorder enjoys an increasingly large user base since it keeps providing a good user experience. Its third version featured more editing functions and improvement in overall usability. Easier access to certain functions, better sound quality supported by a built-in Denoiser, and smoothness in high fps video recording can all be experienced in this new version. The newly added free-to-use video editor has a wide range of advanced editing tools for video content publishers. Video editing highlights are as the following.

Unlimited media tracks are enabled to add any media files or effects, which can largely enrich the final video works in different dimensions. The subtitles, texts, stickers, BGM etc can appear at the same timeline by applying as many tracks.

Resources and templates of annotations, texts, transitions, filters and animated video effects are also available in the video editor. By simply adding effect items to timelines, they will be applied to video clips immediately.

The built-in video editor has a simple and clear layout for beginners to access whatever tools they want quickly. Apart from ease of use, the editor is free of charge.

iTop Screen Recorder 3 is now available for all Windows 11, 10, 8.1, 8, and 7. The new update is also available to download across prestigious websites like CNET, Softonic, Softpedia and Majorgeeks as well as the Official Website iTop Screen Recorder – https://recorder.itopvpn.com/?insur=pr3.0

Founded in 2016, iTop has been creating tools and software that run on both desktop PCs and mobile devices. iTop product line includes VPN, screen recorder, data recovery software, password manager and many other utilities. Trusted by more than 20+ million users, iTop’s mission is to enable users a secure and more enjoyable digital life. By creating intuitive, smart, stable & secure software products all the while, we managed to keep our pride as a tech-oriented company.

ABOUT THE NEWS SOURCE:
ITop

Founded in 2016, iTop provides applications on Windows, Android, iOS and Mac devices with the vision of making reliable software to achieve better digital life. iTop Screen Recorder is a very popular Windows PC screen recorder that has been downloaded by 8 million+ users worldwide. The recorder has a simple interface and integrates a built-in editor that helps users get video recordings easier, faster and clearer in original or up to 4K UHD quality.

LEGAL NOTICE AND TERMS OF USE: The content of the above press release was provided by the “news source” ITop or authorized agency, who is solely responsible for its accuracy. Send2Press® is the originating wire service for this story and content is Copr. © ITop with newswire version Copr. © 2022 Send2Press (a service of Neotrope). All trademarks acknowledged. Information is believed accurate, as provided by news source or authorized agency, however is not guaranteed, and you assume all risk for use of any information found herein/hereupon.