Join the Scientology Network in Celebration of Hispanic Heritage Month

LOS ANGELES, Calif., Sept. 29, 2021 (SEND2PRESS NEWSWIRE) — Hispanic Heritage Month is celebrated annually September 15–October 15 to honor the history, culture and contribution of American citizens and residents whose ancestors came from Spain, Mexico, the Caribbean and Central and South America. And what better way to do so than with a visit to the Scientology Network on DIRECTV Channel 320, streaming on Scientology.tv, mobile apps and via the Roku, Amazon Fire and Apple TV platforms. 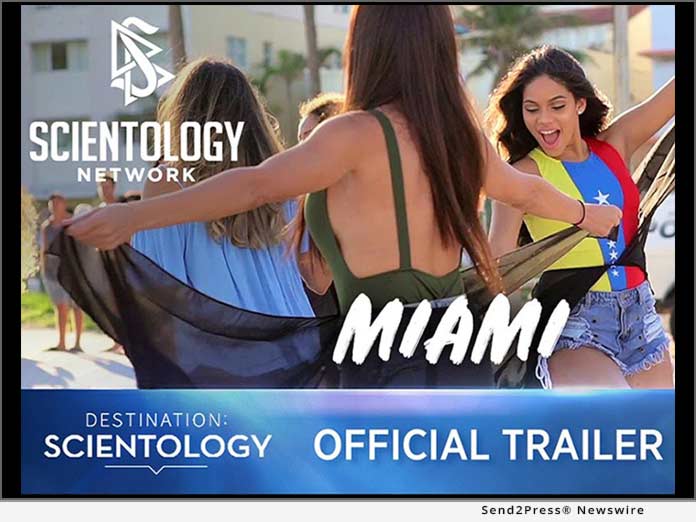 Destination Scientology: Miami takes visitors on a tour through this tropical paradise, a kaleidoscope of Latin and Caribbean cultures that have come together to create a unique international metropolis. And just as Miami represents the gateway to opportunity to people from throughout the Latin world, the city’s Scientology Church is a gateway to ability and personal and spiritual freedom. Enjoy a glimpse of the eclectic Latin culture where people of so many different backgrounds live together and thrive.

Destination Scientology: Tampa welcomes viewers to historic Ybor City, where Florida’s Cuban culture was born. A city within the city of Tampa, Ybor is a historic district and right at its center is Ybor Square, home to the Church of Scientology Tampa. Built in 1885 as the largest cigar factory in the world, the building was completely restored by the Church of Scientology. “To a Cuban,” says Marta, a Cuban-American Scientologist who emigrated to this country in her youth, “and I am a Cuban to my soul, what this place does is it rekindles my love for my place of birth.”

Destination Scientology: Harlem. Not only is Harlem the capital of Black America, it is also a cultural nexus, with Spanish Harlem dancing to a distinctly Latin beat. “El Barrio,” says Shashianna, who works at the Church, “that’s my hometown.” Here, you experience what Hispanic culture really is, she says, known for its “family type of vibe,” where “you can go to every Latin country—Mexico, Puerto Rico, Dominican Republic—You know it by the food and by the way people talk.” The Church celebrates these cultures, hosting events and programs for this diverse and vibrant community.

Destination Scientology: Mexico City provides insight into the history and honors the cultural background of more than 63 percent of Hispanic and Latinx people in the U.S. And with Hispanics and Latinx representing more than 48 percent of those living of Greater Los Angeles, a visit to the Churches of Scientology of Los Angeles, San Fernando Valley, Pasadena and Inglewood will really round out the picture.

The Scientology Network also features Hispanic and Latinx humanitarians in episodes of Voices for Humanity. In cities in America and from Colombia to Mexico, the Dominican Republic, Honduras and Guatemala, these men and women preserve and enhance all that is best in the Latin and indigenous cultures by eradicating drug abuse, illiteracy, criminality, corruption and vice through the use of Scientology-supported humanitarian programs.

Scientology Network debuted March 12, 2018. It has been viewed in 240 countries and territories worldwide in 17 languages. Satisfying the curiosity of people about Scientology, the network takes viewers across six continents, spotlighting the everyday lives of Scientologists, showing the Church as a global organization, and presenting its social betterment programs that have touched the lives of millions. The network also showcases documentaries by independent filmmakers who represent a cross-section of cultures and faiths, but share a common purpose of uplifting communities.