CITY OF INDUSTRY, Calif., Oct. 8, 2019 (SEND2PRESS NEWSWIRE) — Ken Rakusin, President & CEO of Gordon Brush Mfg. Co., Inc., was the recipient of the PATRIOT AWARD at the 2019 MADE IN AMERICA CONVENTION, that was held at the Indianapolis, Indiana convention center on October 3-6. “This award was presented to Ken for his Proud To Be An American attitude and his unwavering commitment to manufacturing in the United States, in-spite of the infiltration of low cost, inferior Chinese goods,” said Don Buckner, founder, MadeInAmerica.com. 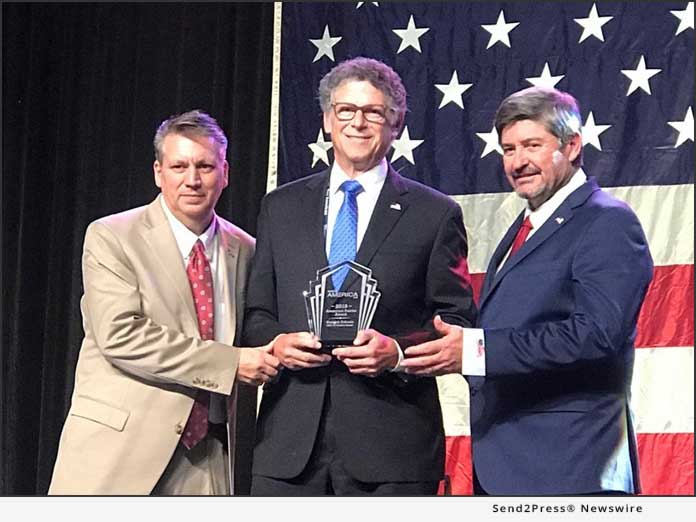 In addition, Buckner presented Gordon Brush with the ARMED FORCES AWARD and commented, “On behalf of Made in America.com we commend you for your patriotism and extraordinary efforts in developing the ‘Chamber’ brush, for the Abrams tank, that saved the United States Army, $1.5 Billion.”

“I am overwhelmed, honored, and deeply humbled to receive these two prestigious awards. My goal was to make a difference for our employees, our customers, and our country. I guess we achieved that,” said Rakusin.

“I want to thank Don and his team for recognizing our accomplishments. Gordon Brush is Proud To Be An American Manufacturer and a GOLD sponsor of the 2019 MADE IN AMERICA convention,” added Rakusin.

About Made in America.com

Made in America.com is a non-partisan, private company whose mission is to raise awareness for the economic, environmental and community impact of American-made manufacturers and brands.

Gordon Brush Mfg. Co., Inc., has a rich history as an American brush manufacturer. Founded in 1951, Gordon Brush® includes two brands whose origin dates to 1855 and 1897. The Company is ISO 9001:2015 certified and a leading manufacturer of specialty, custom and standard brushes for a multitude of industries.

Gordon Brush Mfg. Co., Inc. was the 2018 recipient of the Made: In America Award. The award was presented in a ceremony in the Rayburn Office building rotunda, in Washington, D.C., in July, 2018. Congresswoman Grace Napolitano (CA-32), also presented the Company’s President and CEO, Ken Rakusin, with a special Congressional Recognition Award for his commitment to American manufacturing. Mr. Rakusin was also honored as an American Made Hero.

MADE In America  |  Made in USA

View More Manufacturing News
"I am overwhelmed, honored, and deeply humbled to receive these two prestigious awards. My goal was to make a difference for our employees, our customers, and our country. I guess we achieved that," said Rakusin.

LEGAL NOTICE AND TERMS OF USE: The content of the above press release was provided by the “news source” Gordon Brush Mfg. Co., Inc. or authorized agency, who is solely responsible for its accuracy. Send2Press® is the originating wire service for this story and content is Copr. © Gordon Brush Mfg. Co., Inc. with newswire version Copr. © 2019 Send2Press (a service of Neotrope). All trademarks acknowledged. Information is believed accurate, as provided by news source or authorized agency, however is not guaranteed, and you assume all risk for use of any information found herein/hereupon.