CITY OF INDUSTRY, Calif., May 6, 2021 (SEND2PRESS NEWSWIRE) — In 1990, Ken Rakusin took the position of president at Gordon Brush Manufacturing Company, but he was not sure what he was getting himself into. The company was based out of a dark and rundown 15,000 square foot facility. 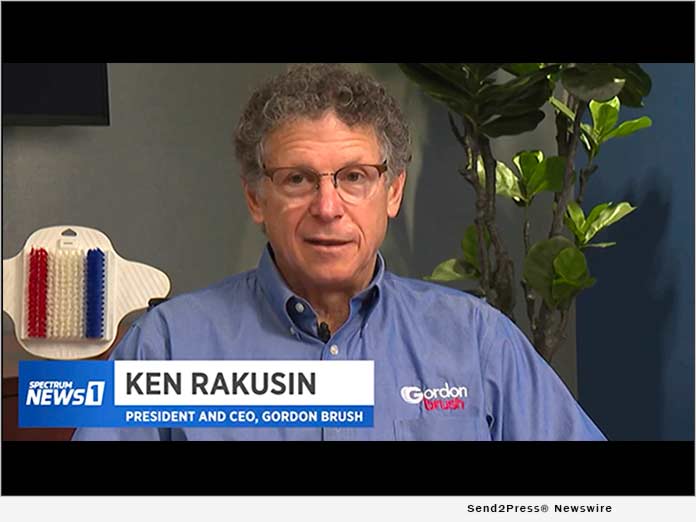 “We had 22 employees. I mean, this was a little, tiny company that was on the verge of going out of business, and every year, for the next six years, I was able to double the company’s profits,” Rakusin said.

Thirty-one years later, Rakusin said there are 200 employees in a 182,000 square foot facility making more than 17,000 types of brushes for many industries, including medical, aerospace, janitorial and military.

Rakusin remains committed to keeping jobs in the City of Industry, despite an increasing number of manufacturers going overseas for cheaper labor.

“I could put a lot of money in my pocket if I outsourced everything and I went to China or Mexico,” he said. “But I also have this loyalty to my employees. We have people that have been here more than 35 years. Our plant manager used to be the janitor.”

However, one challenge of staying put in the U.S. is finding workers who have the skills or the desire to work a blue-collar job.

“Nobody that works in a factory that when they were going through school said, ‘Gee, I want to make brushes for a living,'” Rakusin said. “It doesn’t happen.”

It is an issue that Joanna McClaskey, the executive director of the Industry Business Council, is looking at as part of the Made in City of Industry initiative.

The goal is to keep existing manufacturers, which provide about 17,000 local jobs, or 25% of total employment, and attract new ones to the city.

“There are so many people that college is not their first choice of what they should do in their life,” Rakusin said. “They might want to work with their hands. They have this great mechanical mind, or they have this great mind where they love to see machines work and operate and design machines.”

He ultimately wants to see more education in the U.S. geared toward those who work best with their hands, preparing them for blue-collar jobs critical to the economy.

industrial brushes  |  Made in USA

View More Manufacturing News
"I could put a lot of money in my pocket if I outsourced everything and I went to China or Mexico," he said. "But I also have this loyalty to my employees. We have people that have been here more than 35 years. Our plant manager used to be the janitor."

LEGAL NOTICE AND TERMS OF USE: The content of the above press release was provided by the “news source” Gordon Brush Mfg. Co., Inc. or authorized agency, who is solely responsible for its accuracy. Send2Press® is the originating wire service for this story and content is Copr. © Gordon Brush Mfg. Co., Inc. with newswire version Copr. © 2021 Send2Press (a service of Neotrope). All trademarks acknowledged. Information is believed accurate, as provided by news source or authorized agency, however is not guaranteed, and you assume all risk for use of any information found herein/hereupon.