"LCAD is privileged to be the only art school in the nation to house the Brandt Papers, and we are thrilled to share this wonderful archive with the rest of the world through our partnership with Project Gado," said President Jonathan Burke.

“LCAD is privileged to be the only art school in the nation to house the Brandt Papers, and we are thrilled to share this wonderful archive with the rest of the world through our partnership with Project Gado,” said President Jonathan Burke. “While Brandt’s full-scale works are held by museums and private collectors worldwide, his sketchbooks tell the private story of an artist who was committed to drawing and willing to explore any visual idiom that met his needs.”

In 1962, Brandt was involved in designing the first two college art studios for what was then Laguna Beach School of Art (today known as LCAD). Joan Scarboro and Shelley Walker, daughters of Brandt, donated the archive to the collections of the Dennis and Leslie Power Library in 2011.

“Our mission is to digitize and share the world’s visual history,” said Amy Smith, co-founder of Project Gado. “We’re excited not only to share Rex Brandt’s inspiring sketchbooks on Getty Images, but also to expand the breadth of our collections into the world of fine art.”

About Laguna College of Art and Design:

Founded in 1961 in Laguna Beach, California, Laguna College of Art and Design (lcad.edu) is one of the top art and design schools in the nation. LCAD offers five rigorous undergraduate programs in Drawing and Painting (as well as with a Sculpture Emphasis), Illustration, Design and Digital Media, Animation, and Game Art, as well as a Master of Fine Art degree. NIKE selected LCAD as one of the top three design schools in the world and is one of many leading companies in the arts and design industries that employ 90 percent of LCAD graduates. 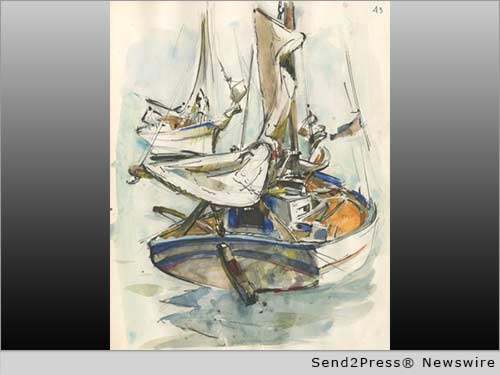 NEWS ARCHIVE NOTE: this archival news content, issued by the news source via Send2Press Newswire, was originally located in the Send2Press® 2004-2015 2.0 news platform and has been permanently converted/moved (and redirected) into our 3.0 platform. Also note the story “reads” counter (bottom of page) does not include any data prior to Oct. 30, 2016. This press release was originally published/issued: Mon, 13 Oct 2014 06:59:34 +0000

View More California Business News
"LCAD is privileged to be the only art school in the nation to house the Brandt Papers, and we are thrilled to share this wonderful archive with the rest of the world through our partnership with Project Gado," said President Jonathan Burke.

LEGAL NOTICE AND TERMS OF USE: The content of the above press release was provided by the “news source” Laguna College of Art and Design or authorized agency, who is solely responsible for its accuracy. Send2Press® is the originating wire service for this story and content is Copr. © Laguna College of Art and Design with newswire version Copr. © 2014 Send2Press (a service of Neotrope). All trademarks acknowledged. Information is believed accurate, as provided by news source or authorized agency, however is not guaranteed, and you assume all risk for use of any information found herein/hereupon.