"Rex Brandt is a seminal figure in our college's history and we are honored by Mark and Janet's gift of this beautiful painting," said President Jonathan Burke. "Our permanent collection of fine art instructs and inspires our students and arts scholars to celebrate the accomplishments of master painters and sculptors."

LCAD will install “Evening Rendezvous” in the administrative building on Main Campus at 2222 Laguna Canyon Road in Laguna Beach, CA 92651.

“Rex Brandt is a seminal figure in our college’s history and we are honored by Mark and Janet’s gift of this beautiful painting,” said President Jonathan Burke. “Our permanent collection of fine art instructs and inspires our students and arts scholars to celebrate the accomplishments of master painters and sculptors.”

“Evening Rendezvous” was also one of 12 pieces from the The Hilbert Collection that was part of LCAD’s summer exhibition celebrating Brandt’s centennial birthday.

Mark Hilbert recalled meeting Rex Brandt by chance at the dentist’s office over 30 years ago. When he approached the painter, he was invited to visit Brandt’s home to see his studio.

“With Hollywood demands for production designers, painters and illustrators from the 1930’s to 1950’s, there were more working artists in Los Angeles, California than anywhere else in the world at one time,” Hilbert said. “Rex was one of the great ones among the California artists of that period. Although he trained more than 5,000 students over a 40-year period, he continued to push himself artistically and his later works are just as strong as his earlier watercolors. He has left a great body of work.”

Hilbert was drawn to Brandt’s work because of his mastery of pigmentation and light. “Few watercolor artists can manipulate colors the way he did,” Hilbert said. “He was also a very rare watercolorist in that he was always willing to take risks with his work.”

In 1962, Brandt was involved in designing the first two college art studios for what was then Laguna Beach School of Art (today known as Laguna College of Art and Design). With fellow painter Phil Dike, Brandt taught a workshop for the school and in 1978, he served on the school’s Advisory Board and its Endowment Fund campaign. Brandt served as head of faculty for the school’s summer class curriculum in 1963.

Presently, selections from LCAD’s The Brandt Archives are on loan to the Metropolitan Water District of Southern California exhibition, “From the Archives Reaching for Water: Rex Brandt and Metropolitan.” The exhibition will be on display in the South Gallery public space next to the building’s lobby entrance for the next two years at Metropolitan Water District headquarters, 700 North Alameda Street, Los Angeles, CA 90012-2944.

Brandt was a beloved resident of Corona del Mar, CA where he and his wife taught classes at their home and studio, which they named, “Blue Sky.” His design for the city seal of Newport Beach is still in use today.

Through a partnership with Project Gado, LCAD’s archive of Brandt’s sketchbooks, photographs and archival materials now appear on Getty Images at: http://bit.ly/rexbrandtlcadgado/.

About Laguna College of Art and Design:
Founded in 1961, Laguna College of Art and Design (LCAD) is one of the top art and design schools in the nation. LCAD offers undergraduate degrees (BFA) in Animation, Design + Digital Media, Fine Arts (Drawing and Painting), Game Art and Illustration, as well as Master of Fine Arts degrees (MFA) in Drawing and Painting. Named by NIKE as one of the top three design schools in the world, LCAD is closely partnered with industry leaders. These partnerships have resulted 90% employment rate for LCAD’s visual arts graduates. Blizzard Entertainment, Disney Animation, DreamWorks, FOX, Hurley International, NIKE, VANS, Warner Brothers Animation and more employ LCAD visual arts alumni.

LCAD Fine Arts alumni are accepted to the most prestigious graduate programs and go on to become internationally recognized artists and educators who shape dialogue with renowned collectors, museums and gallerists. The Dennis and Leslie Power Library at LCAD houses invaluable historic archives that include The Rex and Joan Irving Brandt Papers. 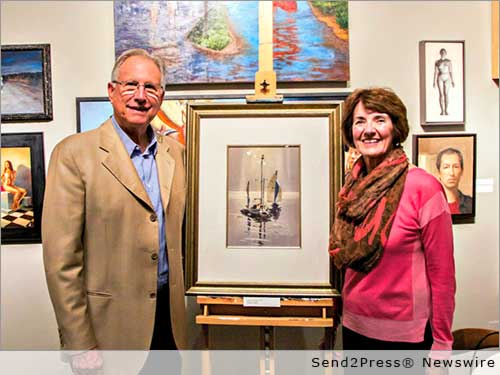 NEWS ARCHIVE NOTE: this archival news content, issued by the news source via Send2Press Newswire, was originally located in the Send2Press® 2004-2015 2.0 news platform and has been permanently converted/moved (and redirected) into our 3.0 platform. Also note the story “reads” counter (bottom of page) does not include any data prior to Oct. 30, 2016. This press release was originally published/issued: Tue, 10 Feb 2015 06:00:01 +0000

View More California Business News
"Rex Brandt is a seminal figure in our college's history and we are honored by Mark and Janet's gift of this beautiful painting," said President Jonathan Burke. "Our permanent collection of fine art instructs and inspires our students and arts scholars to celebrate the accomplishments of master painters and sculptors."

LEGAL NOTICE AND TERMS OF USE: The content of the above press release was provided by the “news source” Laguna College of Art and Design or authorized agency, who is solely responsible for its accuracy. Send2Press® is the originating wire service for this story and content is Copr. © Laguna College of Art and Design with newswire version Copr. © 2015 Send2Press (a service of Neotrope). All trademarks acknowledged. Information is believed accurate, as provided by news source or authorized agency, however is not guaranteed, and you assume all risk for use of any information found herein/hereupon.