OLD BRIDGE, N.J., Nov. 28, 2017 (SEND2PRESS NEWSWIRE) — When The Bridge Christian Radio Network, based in Old Bridge, N.J., gained authorization to expand its Christian Bible teaching broadcasts into New York City in November 2013, no one could have anticipated the battle that would ensue before the station could actually begin broadcasting on its own frequency, 95.1 FM in the heart of Manhattan. 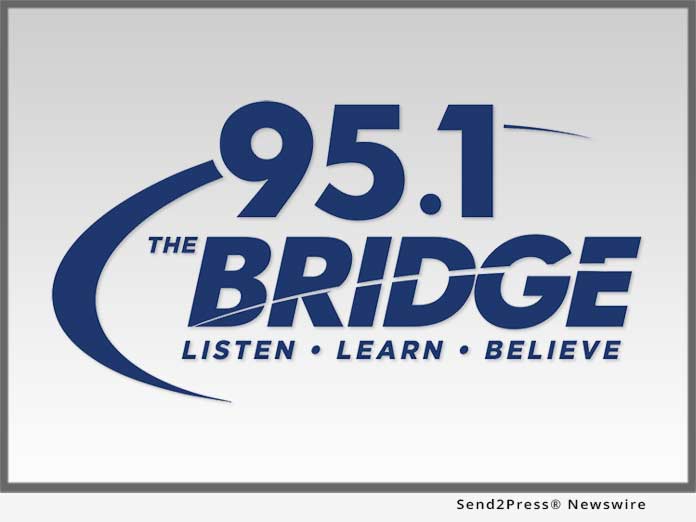 Unauthorized broadcasters, or “pirates,” had co-opted over 80 percent of The Bridge’s signal on 95.1 FM. As a result, listeners tuning into 95.1, expecting The Bridge’s signature Bible teaching, could hear anything but that, including a variety of music formats all illegally broadcasting on the signal.

“We brought the pirate problem to the government’s attention,” said Lloyd Pulley, CEO of The Bridge and senior pastor of Calvary Chapel Old Bridge, which owns the station. “We fought hard, and we won. While the pirates continue to encroach on the signal in some areas, we are delighted that The Bridge is now broadcasting clearly in 70 percent of its own coverage area, which covers from the Bronx to Lower Manhattan.”

A listener-supported, noncommercial Christian teaching station, The Bridge originally launched in 2004. The station’s David v. Goliath battle with radio pirates is not the only unique aspect of the station’s expansion into New York. Currently, The Bridge is the ONLY Christian FM radio station broadcasting directly from New York City. The addition of this tower, located near the United Nations Building, makes it possible for The Bridge to reach over four million more potential listeners, in addition to the potentially seven million already reached throughout New York, New Jersey, and Pennsylvania on the station’s other frequencies.

One New York listener notes, “We have waited a long time to hear clear, precise, and doctrinally sound, powerfully relevant Bible teaching for some time, and now we have The Bridge.”

The station’s expansion into New York enables The Bridge to share its message of hope in Christ to people from every tribe and tongue, including the approximately 600 language groups residing in New York. By bringing The Bridge to New York City, supporters of the station are often reminded, on and off the air, that they are essentially “bringing the Gospel to the world.”

As well as being the only Christian FM station broadcasting from Manhattan, The Bridge is also unique in its format.

“The Bridge has not followed the trend of many other Christian radio stations to broadcast primarily music, and continues to air some of the finest Bible teaching in the nation,” says Rob Taylor, general manager of The Bridge. “With this format, the Gospel is preached, the Word of God is taught, and the name of Jesus is clearly proclaimed to all, without compromise, 24 hours a day, 7 days week, 365 days a year.”

In addition to its New York frequency, 95.1 FM, The Bridge can currently be heard on several frequencies throughout the Tri-state area, including 89.7 FM in Monmouth and Ocean Counties in N.J., 91.9 FM in Southern Middlesex and Northern Monmouth Counties in N.J., 103.1 FM in Northern N.J., and nationwide via its mobile app or http://www.bridgeradio.org/.

Of the powerful impact of The Bridge, one listener writing to the station notes, “Thank you for the courage and God’s blessing to have this wonderful radio station full of teachings… I love listening to The Bridge and absorbing the Word on a daily basis. Thank you, and keep spreading God’s word to believers, so that we may be lifted up each day and to the unbelievers, so that they may be led to Christ.”

The Bridge Christian Radio, Bridgelight, LLC is a radio ministry of Calvary Chapel Old Bridge, N.J. Learn more about The Bridge 95.1 FM in New York City, and support its ongoing effort to broadcast Bible teaching in the greatest city in the world by visiting http://www.bridgeradio.org/.

View More Broadcasting and Podcasting News
"We brought the pirate problem to the government's attention," said Lloyd Pulley, CEO of The Bridge and senior pastor of Calvary Chapel Old Bridge, which owns the station. "We fought hard, and we won."

ABOUT THE NEWS SOURCE:
The Bridge Christian Radio Network

The Bridge Christian Radio, Bridgelight, LLC is a radio ministry of Calvary Chapel Old Bridge, N.J. The Bridge is a Christian radio station with the mission of reaching souls with the life-changing message of the Gospel of Jesus Christ. Designed with you in mind, and safe for your entire family, The Bridge brings you solid Bible teaching, including an extraordinary lineup of the nation’s best speakers and teachers. Listener supported and commercial free, The Bridge is your constant stream of living water in an uncertain and ever changing world, bringing you encouragement and hope for today.

LEGAL NOTICE AND TERMS OF USE: The content of the above press release was provided by the “news source” The Bridge Christian Radio Network or authorized agency, who is solely responsible for its accuracy. Send2Press® is the originating wire service for this story and content is Copr. © The Bridge Christian Radio Network with newswire version Copr. © 2017 Send2Press (a service of Neotrope). All trademarks acknowledged. Information is believed accurate, as provided by news source or authorized agency, however is not guaranteed, and you assume all risk for use of any information found herein/hereupon.