POMPANO BEACH, Fla., June 14, 2019 (SEND2PRESS NEWSWIRE) — The City of Pompano Beach and Pompano Beach CRA have opened a new opportunity for all real estate brokers in the municipality’s pursuit of a master developer for the City’s Downtown and Innovation District. A 2% commission is in play for the transformative project, one of the last of its kind in the South Florida market. Currently, a Request for Letters of Interest (RLI) for a Master Developer has been issued, with a deadline of July 10, 2019. 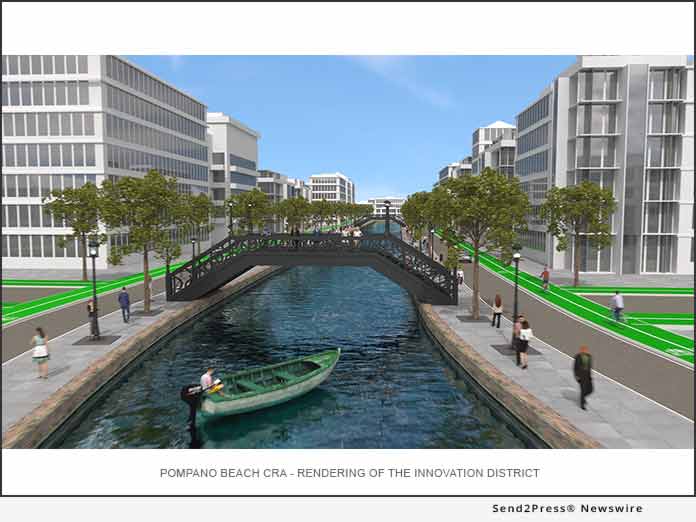 “This is a tremendous opportunity for any broker who is well-connected with the nation’s top developers,” said Nguyen Tran, CRA Director. “We are seeking developers who understand our goals for the area, offer experience in prior projects of this scope and have the financial capability to undertake this project. By reaching out to the national real estate broker community, we hope to expand our list of potential applicants.”

Over the past 20 years, the Northwest CRA has assembled over 30 acres of land within the almost 70-acre Innovation District. Most developable parcels are generally located along the busy I-95 corridor and Atlantic Boulevard, making this one of the last prime development opportunities of its kind in South Florida.

Based on a previous market analysis, the following can guide the master plan for a mix of desirable uses:

In addition, as part of the marketing and branding strategy for downtown, the CRA envisions a creative and unique drainage system, possibly using linear waterway systems that create a visible and desirable asset for development parcels, much like the waterways in Amsterdam in the Netherlands, and San Antonio, Texas (from a visual perspective). A stormwater conceptual master license has already received county approval and a drainage district will need to be formed. Design and construction of a creative and aesthetically pleasing drainage option can occur simultaneously with the vertical development.

The City has also invested heavily in cultural assets in the downtown area. The Pompano Beach Cultural Center, Bailey Contemporary Arts and Historic Ali Cultural Arts are spread out over three distinct geographic areas in the Downtown providing opportunities for pedestrian movement between them. Highlighting these facilities and using them as anchors in the master plan will provide a ready-made set of assets to build upon for future redevelopment.

Brokers can direct developers to the City’s eBid system to view the complete solicitation document, which can be downloaded for free as a PDF at: https://pompanobeachfl.ionwave.net/CurrentSourcingEvents.aspx.

About The Pompano Beach CRA:

The City of Pompano Beach Community Redevelopment Agency (CRA) was created in 1989. It has two dependent districts: Northwest CRA and East CRA established by City government for the purpose of carrying out redevelopment activities that include reducing or eliminating blight, improving the economic health of an area, and encouraging public and private investments in a CRA district.

The Northwest CRA District covers an area of about 3,084 acres encompassing a large part of the western portion of the City between Atlantic Boulevard and Copans Road generally west of Dixie Highway. The Pompano Beach CRA is funded through Tax Increment Financing (TIF). The funds are collected as property values increase and a portion of that increase is captured by the Agency. TIF raises revenue for redevelopment efforts without raising taxes.

View More Economic Development News
"This is a tremendous opportunity for any broker who is well-connected with the nation's top developers," said Nguyen Tran, CRA Director.

LEGAL NOTICE AND TERMS OF USE: The content of the above press release was provided by the “news source” Pompano Beach CRA or authorized agency, who is solely responsible for its accuracy. Send2Press® is the originating wire service for this story and content is Copr. © Pompano Beach CRA with newswire version Copr. © 2019 Send2Press (a service of Neotrope). All trademarks acknowledged. Information is believed accurate, as provided by news source or authorized agency, however is not guaranteed, and you assume all risk for use of any information found herein/hereupon.