CHICAGO, Ill., Dec. 11, 2017 (SEND2PRESS NEWSWIRE) — Bestselling children’s author Aaron Ozee is interested in more than just writing great fiction, he’s interested in leaving an impact on readers everywhere. For that reason, Ozee has partnered with his publisher, Lulu Press, in order to donate 100-percent of all proceeds from his latest bestselling children’s book, “Regulus” (ISBN: 978-1387010790), for the period of December 1, 2017 to January 1, 2018. 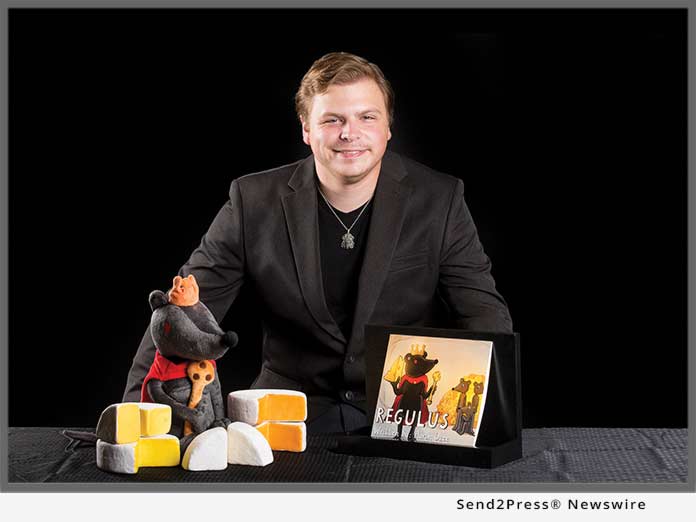 “Regulus” is a riveting story that tells the tale of Regulus — a King of mice who is betrayed by those he holds dearest. The story has already garnered rave reviews and the philanthropic partnership will directly benefit both the Durham Literacy Center in Durham, N.C. as well as Young Chicago Authors in Chicago, Ill.

Aaron Ozee is not a newcomer to the writing scene. He has spent the vast majority of his life telling stories. Ozee has already written and published 11 books, with “Regulus” being his most recent release. Ozee has endeavored to make “Regulus” one of his greatest works and the results have been impressive, to say the least. The title is available in print and eBook format in over 100 different countries around the world thanks to a partnership with some of the biggest outlets on the planet, including Amazon and Barnes & Noble.

“Regulus” has already been adapted into an animated, stop-motion picture by artist Martyna Koleniec. The short film, available on YouTube, has already racked up more than 100,000 views. Ozee has even partnered with the stuffed animal manufacturer Budsies in order to release a custom-designed Regulus plushie.

Ozee knows that his writing can leave an impact and he has made sure to engage in philanthropy whenever possible.

Ozee says of his fundraising partnership, “Contributing to the mission that the Durham Literacy Center and Young Chicago Authors have undertaken greatly honors my work and what I stand for as a creator.”

Ozee is also a member of several other prominent non-profit groups in and around Chicago, including the Academy of American Poets, Chicago Writers Association and the Society of Children’s Book Writers & Illustrators.

Ozee goes on to say, “Working with Lulu Press, my print publisher, to make this campaign successful is a fantastic way for us to work together to give back to the community and fuel the ambitions of aspiring writers.”

Prior to the announcement of Ozee’s philanthropic partnership, Regulus had already consistently made itself to the Top 100 Bestselling Products List on the Lulu Press platform. Additionally, Amazon had ranked Regulus as their #1 New Release for Children’s Books — a high honor and one of great outreach. As the philanthropic partnership gets underway, there is no limit to the positive impact that Ozee’s work will bring to the community.

For all media inquiries, please call the offices of Ozee Holdings at (630) 656-0323. Additional information regarding this charitable campaign will be shared on Facebook (@AaronOzee), Twitter, (@AaronOzee), or via Aaron Ozee’s official website at http://www.aaronozee.com/.

To purchase a copy of Regulus, please visit http://www.lulu.com/spotlight/aaronozee.

View More Books and Publishing News
"Contributing to the mission that the Durham Literacy Center and Young Chicago Authors have undertaken greatly honors my work and what I stand for as a creator," says Ozee.

LEGAL NOTICE AND TERMS OF USE: The content of the above press release was provided by the “news source” Aaron Ozee or authorized agency, who is solely responsible for its accuracy. Send2Press® is the originating wire service for this story and content is Copr. © Aaron Ozee with newswire version Copr. © 2017 Send2Press (a service of Neotrope). All trademarks acknowledged. Information is believed accurate, as provided by news source or authorized agency, however is not guaranteed, and you assume all risk for use of any information found herein/hereupon.