LOS ANGELES, Calif. and HYDERABAD, Pakistan, Sept. 15, 2022 (SEND2PRESS NEWSWIRE) — In response to unprecedented flooding in Pakistan, described by the UN as a climate catastrophe, Scientology volunteers continue providing urgently needed supplies and health care in their outreach to affected communities. 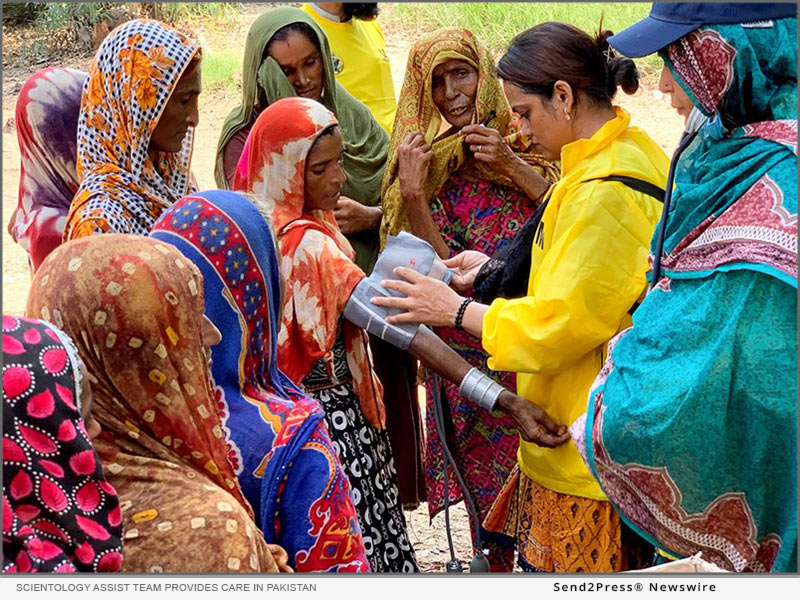 PHOTO CAPTION: Doctor on the Scientology Assist Team provides care in a flood-damaged region of Pakistan.

With a third of the country under water and authorities predicting it could take six months for floodwaters to recede in areas hardest hit, Scientology Volunteer Assist Teams continue providing help.

Waterborne and other diseases pose a serious threat to these communities, so the doctors hold a medical camp in each village they visit and administer care.

“We arranged a medical camp in a village in Hyderabad,” said Perwaiz Hasan, who leads the Scientology Assist Teams. “No help has reached this area so far. Flood victims said we are the first ones.”

They had to come through swampland to survey the damaged homes.

“Their suffering is real. The damage is real. They are in great need of help,” said Hasan.

They delivered food and water, and doctors on the team set up a clinic to provide first aid and medicine.

A few days later the team arrived in another village. They came at the invitation of two local teachers who thanked them not only for the medical care, food and supplies they brought but also for giving the children balls and bats, which were a huge hit with the kids.

At another nearby village, what was most appreciated was the mosquito repellent and nets they brought.

Food, water and other urgently needed supplies have not arrived in these remote villages. The Scientology Volunteer Assist Team has been raising donations and bringing supplies to the villages they visit.

In addition to performing medical examinations and distributing needed medicine, the volunteers train villagers to help each other using simple Scientology assists—techniques developed by Scientology Founder L. Ron Hubbard that speed recovery by addressing the emotional and spiritual factors in stress and trauma. One young girl who had a stomachache didn’t know what to think of the technique. But the volunteer continued to administer it and after a short while, the girl looked very surprised. The stomach pain was gone.

This was the first medical camp one of the doctors participated in. “She was very thankful to us,” said Hasan. She plans to join them as they continue their outreach.

Modern technology has been of major assistance to the volunteer team. Using their Facebook and WhatsApp they have been able to collect donated items including clothes, food and water to distribute to the communities they visit.

Their van driver was so taken with the volunteers that he took one of their bright yellow T-shirts for the next time “because I want to continue working with you as a volunteer,” he said.

For more than a decade, Perwaiz Hasan and his team have been responding to disasters in Pakistan and other countries in South Asia and beyond. His humanitarian work earned him the Freedom Medal of the International Association of Scientologists in 2012.

Scientology: Tools for Life is a filmed introduction to the basic principles and technology that comprise the training these volunteers use. These films are available on the Scientology Network. Tools for Life courses are available free of charge on the Scientology website. They include practical skills anyone may learn and use to overcome problems, live a happier life, and better the lives of those around them.

Available on DIRECTV Channel 320, the Scientology Network can also be streamed at Scientology.tv, on mobile apps and via the Roku, Amazon Fire and Apple TV platforms. Since launching with a special episode featuring Scientology ecclesiastical leader Mr. David Miscavige, Scientology Network has been viewed in 240 countries and territories worldwide in 17 languages.

CAPTION: Doctor on the Scientology Assist Team provides care in a flood-damaged region of Pakistan.