LOS ANGELES, Calif. and KARACHI, Pakistan, Sept. 7, 2022 (SEND2PRESS NEWSWIRE) — Responding to catastrophic floods that have left a third of the country submerged, a team of Scientology volunteers including doctors and other medical personnel are providing relief. 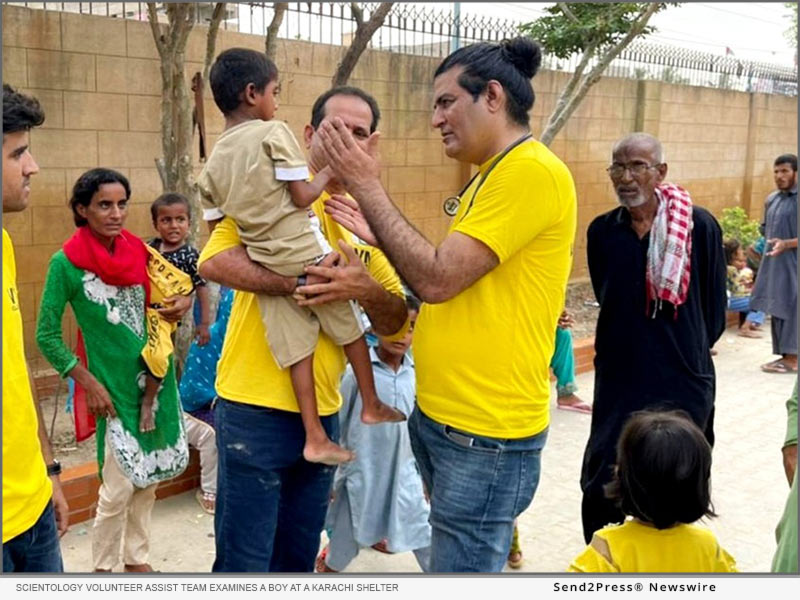 PHOTO CAPTION: A doctor on the Scientology Volunteer Assist Team of Pakistan examines a boy at a Karachi shelter. More than a million Pakistanis have been displaced by the worst floods to hit the country in a decade.

Since June, heavy monsoon rains and melting glaciers have inundated Pakistan in one of the worst disasters in the country’s history. Millions are stranded. More than 1,200 have died. Nearly a third of the casualties are children. Volunteers from Pakistan’s Scientology Volunteer Assist Team are bringing relief and medical care to those in need.

Lead volunteer Perwaiz Hasan mobilized his team to deliver food, water and clothing to flood survivors in shelters in Karachi.

There has been an outbreak of waterborne disease that can cause serious illness or death, and those who suffered injuries also need medical care. Doctors and other trained medical professionals on the team set up medical stations at the shelters where they examine those affected and administer needed care.

Children are often the hardest hit by disasters like these. So in addition to caring for the physical needs of those displaced by the floods, team members engage the children in extroverting activities to orient them in their current environment and bring them relief from the stress they have experienced.

Members of the team have studied the Scientology Tools for Life, a series of 19 courses, many of which include vital skills for responding to disasters. This training increases their communication skills and enables them to bring order to the chaos of disaster sites. The volunteers provide assists — techniques developed by Scientology Founder L. Ron Hubbard that address the emotional and spiritual factors in stress and trauma.

For more than a decade, Perwaiz Hasan and his team have been responding to disasters in Pakistan and other countries in South Asia and beyond. His humanitarian work earned him the Freedom Medal of the International Association of Scientologists in 2012.

The Scientology Network Scientology: Tools for Life is a filmed introduction to the basic principles and technology that comprise the training these volunteers use. Tools for Life courses are available free of charge on the Scientology website. They include practical skills anyone may learn and use to overcome problems, live a happier life, and better the lives of those around them.

Available on DIRECTV Channel 320, the Scientology Network can also be streamed at Scientology.tv, on mobile apps and via the Roku, Amazon Fire and Apple TV platforms. Since launching with a special episode featuring Scientology ecclesiastical leader Mr. David Miscavige, Scientology Network has been viewed in 240 countries and territories worldwide in 17 languages.

CAPTION: A doctor on the Scientology Volunteer Assist Team of Pakistan examines a boy at a Karachi shelter. More than a million Pakistanis have been displaced by the worst floods to hit the country in a decade.