HOLLYWOOD, Calif., Nov. 14, 2022 (SEND2PRESS NEWSWIRE) — East Hollywood’s L. Ron Hubbard Way was transformed into a street festival in honor of the Day of the Dead and the traditions and culture of the indigenous people of the Mexican State of Michoacán. More than a thousand guests filled the street for the celebration, a Michoacán tradition that honors the ancestors and all who have passed away. It was also an affirmation of the culture of the Purépecha, an indigenous people of Michoacán, hosted by the Monarca Purépecha Association and the Church of Scientology Los Angeles. 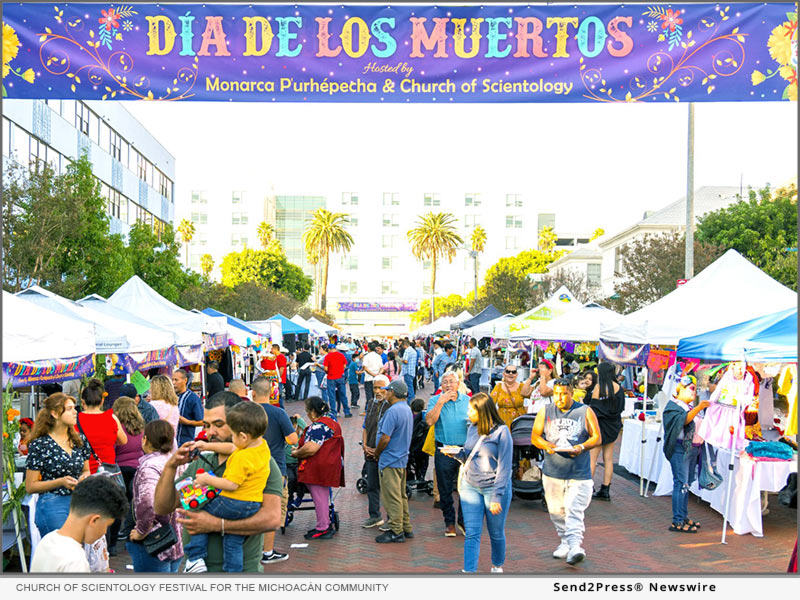 PHOTO CAPTION: Church of Scientology hosted a Dia de Los Muertos festival for the Michoacán Community. More than 1,000 attended to honor their families and ancestors.

Artisans displayed handicrafts, from jewelry to traditional clothing, in a street fair along both sides of the street. They set up next to food stalls where tantalizing aromas invited visitors to sample some of the region’s favorite foods.

There was churipo, a spicey stew prepared with chunks of beef, vegetables and chilis. And pozole, a dish made from hominy and meat, often seasoned and garnished with shredded lettuce or cabbage, chili peppers, onion, garlic, radishes, avocado, salsa or limes. There were also tamales and tacos dorados, with ingredients tightly rolled up in tortillas and fried in oil. And to top it off, a steaming cup of chocolate atole, made with Mexican chocolate, water, and milk, spiced with cinnamon sticks and anise, sweetened with piloncillo, a raw form of pure cane sugar, and thickened with corn flour.

Along the street were ofrendas, flowered altars built on the Day of the Dead to honor those who have passed. They are usually made of marigolds, which blossom at this time of the year in Michoacán, and contain photos and other memorabilia to welcome those who have died and celebrate their lives.

Octavio Chavez Aguirre, Mayor of Lagunillas in the state of Michoacán, commissioned a custom artisanal brass plate and had it presented to the Church of Scientology in recognition of Scientology Founder L. Ron Hubbard and his support of the customs, traditions and rights of people of all cultures.

While this celebration was taking place on L. Ron Hubbard Way, the Guatemalan community was also marking the Day of the Dead in a commemoration reflecting their own unique culture in an event space set up in front of the Church of Scientology Los Angeles.

Los Angeles Scientology Churches serve as hubs for religious organizations, like-minded groups and community leaders all over the Southland, welcoming all cultures, all religions and all nationalities to create a positive Los Angeles.

The Church of Scientology Los Angeles, dedicated by Scientology ecclesiastical leader Mr. David Miscavige in 2010, is featured in an episode of Inside Scientology on the Scientology Network, available on DIRECTV channel 320 and streaming at Scientology.tv, through mobile apps and via the Roku, Amazon Fire and Apple TV platforms.

For more information, visit the website of the Church of Scientology Los Angeles or the new interactive timeline at Scientology.org/our-help-is-yours/.

CAPTION: Church of Scientology hosted a Dia de Los Muertos festival for the Michoacán Community. More than 1,000 attended to honor their families and ancestors.