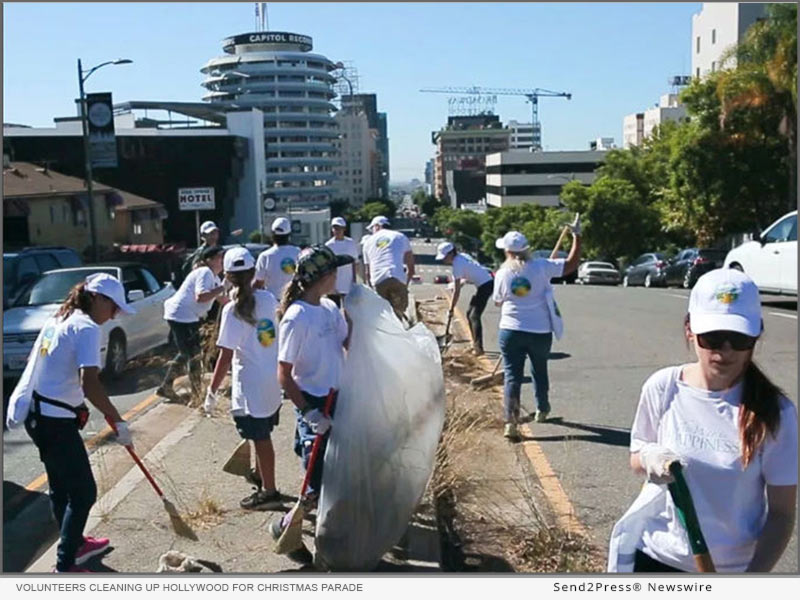 Photo Caption: All are invited to join the volunteers cleaning up Hollywood for the annual Christmas parade.

Anyone wishing to help make the parade special for paradegoers and those watching on TV is invited to join a team of energetic Angelenos Saturday, November 26, who will be making Hollywood beautiful while having a lot of fun.

Each year, Los Angeles Scientologists organize this pre-parade cleanup. But this year’s promises to be unique. Not only will they be making Hollywood and Sunset Boulevards litter-free, they will also be upgrading the parade route by cleaning windows and painting out graffiti. And to help everyone join in the holiday spirit, a team of carolers has promised to come along.

Volunteers should arrive at 9 a.m. at the Association for Better Living and Education (ABLE) at 7065 Hollywood Blvd at 9 a.m., for complimentary coffee and donuts, and to collect their supplies. After the cleanup, they return at noon for pizza and sandwiches provided by local businesses that support the initiative.

The cleanup is cosponsored by The Way to Happiness Foundation, named for author, humanitarian and Scientology Founder L. Ron Hubbard’s common-sense moral code. The Way to Happiness promotes universal values adopted by millions of people of all faiths around the world. Among the 21 precepts are two particularly appropriate for such a project: Set a Good Example, and Safeguard and Improve Your Environment, which points out:

“Care of the planet begins in one’s own front yard. It extends through the area one travels to get to school or work. It covers such places as where one picnics or goes on vacation. The litter which messes up the terrain and water supply, the dead brush which invites fire, these are things one need not contribute to and which, in otherwise idle moments, one can do something about.”

Not only does a cleanup raise the pride of those living and working in a neighborhood, it has also been found to be a deterrent to crime. According to a study published in the Proceedings of the National Academy of Sciences from the University of Pennsylvania and other institutions, “neighborhoods where vacant lots were cleaned up experienced a 29 percent reduction in gun violence, 22 percent decrease in burglaries, and 30 percent drop in nuisances like noise complaints and illegal dumping.

“Residents living near those same spaces also reported feeling much safer post-remediation, with 58 percent having fewer security concerns when leaving their homes and more than three-quarters saying they significantly increased use of their outside spaces for relaxing and socializing.”

Hollywood cleanup volunteers hand out copies of The Way to Happiness after the cleanup and place them in shops for their customers to promote simple, common-sense values anyone may use to make their neighborhood safer and more welcoming.

In addition to the annual Hollywood Christmas Parade activity, a partnership between the Church of Scientology, The Way to Happiness Foundation and the Los Angeles Police Department carries out monthly cleanups to keep Hollywood beautiful. The Los Angeles Churches of Scientology also helped organize the Faith and Blue neighborhood cleanup in October 2022, where more than 50 local businesses, nonprofits and faith-based organizations and some 460 volunteers cleaned 170 city blocks and beautified 200 storefronts under the banner “Unity in the Community.”

For more information on humanitarian initiatives sponsored by the Church of Scientology, visit a new interactive timeline on the Scientology website.

CAPTION: All are invited to join the volunteers cleaning up Hollywood for the annual Christmas parade.