NEW YORK, N.Y., Sept. 11, 2021 (SEND2PRESS NEWSWIRE) — The sheer scope and inhumanity of the World Trade Center attack united Scientologists around the world to do everything in their power to create a better world, beginning that very day with New York Scientologists in their signature bright yellow Volunteer Ministers T-shirts immediately heading downtown. 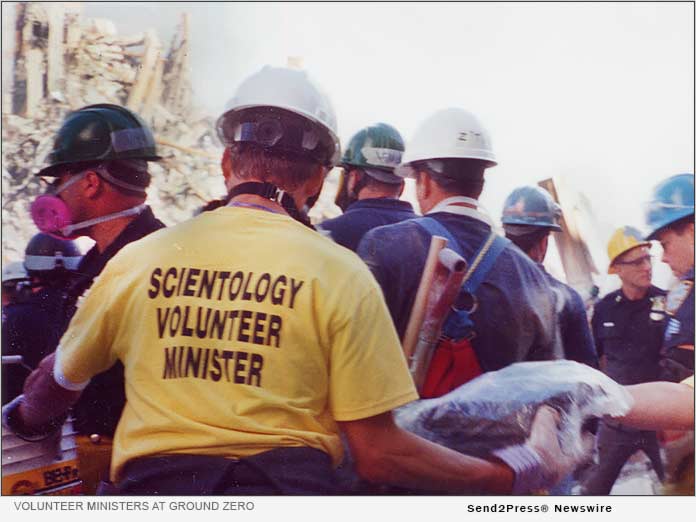 PHOTO CAPTION: More than 800 Volunteer Ministers from across the U.S. and abroad served at Ground Zero in New York.

The Church of Scientology International honors the rescue workers who responded to 9/11: Of the 2,977 killed in the September 11 attacks, 412 were emergency workers who rushed to the scene to save lives.

Within hours of hijackers crashing American Airlines Flight 11 into the North Tower of the World Trade Center, New York’s Volunteer Ministers had clearance to be at the disaster site to provide support to emergency personnel and help bring order to the chaos.

For first responders, there was no respite. This was a race against time with thousands of personnel frantically tearing through a mountain of debris — exhausted, dazed, distraught, and running on nothing but adrenalin.

“I was on the site 10 minutes after the second tower collapsed, and it was a ghost town,” said a lieutenant of the New York Fire Department, since retired. “And it just proceeded to get more and more chaotic, because guys were arriving, there was no order. And when the Scientologists arrived, an air of order entered in.”

“At any time, well over 100 Volunteer Ministers from the Church of Scientology mill around the remains of the World Trade Center,” wrote The New York Times. “On the day of the attack, they took in food to workers…. When rescue workers stagger from the wreckage, the ministers, identified by their T-shirts, try to focus the workers’ minds and revive their bodies.”

Volunteer Ministers are trained to deliver Scientology assists, simple procedures developed by Scientology Founder L. Ron Hubbard that provide relief by addressing the emotional and spiritual factors in stress and trauma. For exhausted rescue workers, physically and emotionally drained, Scientology assists relieved the tension, lightened their spirits, and allowed them to unwind enough to grab a few hours of sleep.

Scientologists continued arriving from across the United States and abroad. Some 800 Volunteer Ministers served, providing relief 24/7 to rescue and cleanup teams. And they continued to serve until the entire project was completed more than eight months later.

“There’s a lot of very highly stressed, worn out, exhausted rescue people here,” said the head of one rescue team, “and your contribution to helping them to deal with their problems and deal with their upset emotions, and to have some tranquility and rest has been a very, very productive and very worthwhile effort.”

“The Volunteer Ministers worked with great energy and great compassion at Ground Zero, helping to ease the physical burdens and mental strains of the rescue workers,” wrote a New York Police Chief in thanks. “The organization, the caring, and the dedication of your Volunteer Ministers were exceptional, very much appreciated, and will long be remembered by those who received their help.”

On September 11, 2001, Mr. David Miscavige, ecclesiastical leader of the Scientology religion, called on Scientologists around the world to view what occurred that day as a “wake-up call.” “No one can afford to turn a blind eye to what just happened,” he wrote.

For more information, visit the Scientology Newsroom or watch Destination: New York on the Scientology Network, available on DIRECTV Channel 320 and streaming at scientology.tv, on mobile apps and via the Roku, Amazon Fire and Apple TV platforms.

*Caption: More than 800 Volunteer Ministers from across the U.S. and abroad served at Ground Zero in New York.