Scientology Volunteer Ministers Reach Out Once Again with Help 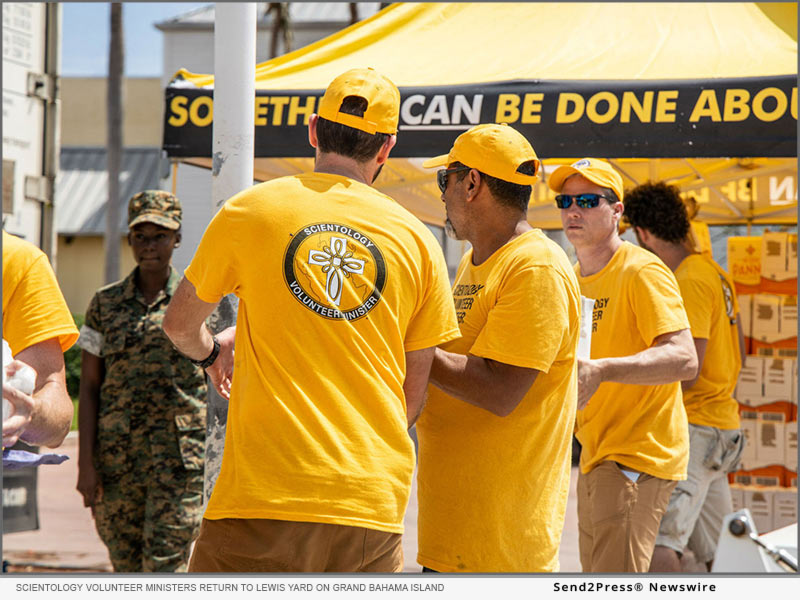 PHOTO CAPTION: Scientology Volunteer Ministers responded to Hurricane Dorian in 2019. Now, with COVID restrictions lifted, they return to the West End town of Lewis Yard on Grand Bahama Island to provide training, so the next time disaster strikes the community can be prepared.

In 2019, a team of Scientology Volunteer Ministers helped in the aftermath of Hurricane Dorian with the search and rescue effort and cleanup, and provided food and supplies to communities hardest hit by the storm. When they completed their disaster response, officials invited them back to train local residents so the next time disaster strikes they can be prepared. But several months later the pandemic struck.

Now, with COVID-related travel restrictions lifted, the volunteers returned to the island as promised. And those who attended their training are so glad they did.

The Volunteer Ministers provided a series of seminars in Lewis Yard, a community in West End Grand Bahama that was devastated by Hurricane Dorian.

A Volunteer Minister, who is also a certified EMT, trained those attending on how to administer CPR — an emergency life-saving procedure that is done when someone’s breathing or heartbeat has stopped. She followed this with training on “Stop the Bleed” —basic trauma care to stop or slow bleeding during emergencies. Each seminar included practical drills through which those attending gained confidence in their ability to use the techniques to save lives.

This was followed by training in the use of Scientology assists — techniques developed by Scientology Founder L. Ron Hubbard that can help people recover from stress, loss and trauma. In addition to showing them how to use these techniques and having them practice them on each other, the Volunteer Minister shared examples of how she has helped survivors recover from the shock of losing a loved one and assisted people to overcome hopelessness so they can get on with rebuilding their lives. She encouraged them to visit the Scientology website to enroll on the Scientology Tools for Life Assists for Illnesses and Injuries Course to gain more information and find additional assists they can learn and use.

One community leader, who helped organize and attended the seminars, said the Scientology team has ignited “a spark of hope in the community.” She now looks forward to preparing surrounding communities so they too can be self-sufficient when disaster strikes.

Whether serving in their communities or on the other side of the world, the motto of the Scientology Volunteer Minister is “Something can be done about it.” The program, created by Mr. Hubbard in the mid-1970s, is sponsored by the Church of Scientology International as a religious social service and constitutes one of the world’s most significant independent relief forces.

The Scientology Network features Scientology: Tools for Life, an introduction to the basic principles and technology that comprise the training of the Volunteer Minister. These films present practical tools anybody may learn and use to overcome problems, live a happier life, and better the lives of those around them.

CAPTION: Scientology Volunteer Ministers responded to Hurricane Dorian in 2019. Now, with COVID restrictions lifted, they return to the West End town of Lewis Yard on Grand Bahama Island to provide training, so the next time disaster strikes the community can be prepared.