"I felt compelled to create this memorial to never forget the senators who potentially damaged the U.S. over affairs as sensitive as nuclear arms in the Middle East. I hope we can resolve to be less apathetic about such unlawful misrepresentation," said artist Daniel Edwards.

WASHINGTON D.C. and ST. PETERSBURG, Fla., April 2, 2015 (SEND2PRESS NEWSWIRE) — As the U.S. takes a major step toward reaching a full agreement with Iran over its nuclear program, artist Daniel Edwards has created a “treason monument,” featuring a bust of Senator Tom Cotton, as a protest to the “apathy of the American people” regarding the 47 Senate Republicans who sent the unauthorized letter, at Cotton’s behest, to Iranian leadership that undermined the U.S. negotiations, to be unveiled later this month by Cory Allen Contemporary Art.

The monument, “Treason Memorial: The Portrait of Tom Cotton,” as described by Cory Allen Contemporary Art, “is designed to combat domestic complacency and depicts the life-size head of Arkansas Republican Tom Cotton looking seditiously ahead, beneath the looming representation of Iranian leader Ali Khamenei, who appears to have a sly and divisive smile. Etched below is a ‘U.S. seal of treason,’ featuring the bald eagle, scornful and glaring with its back turned away, accompanied by text which describes the offense committed by the 47 senators. The back of the monument lists all of the signing senators by name for posterity.”

“According to The Logan Act, these senators committed treason, but will likely not be held accountable, which is why this monument needs to exist,” said spokesman Cory Allen, citing the federal law forbidding any U.S. citizen acting without official authority from influencing disputes or controversies with a foreign government.

“I felt compelled to create this memorial to never forget the senators who potentially damaged the U.S. over affairs as sensitive as nuclear arms in the Middle East. I hope we can resolve to be less apathetic about such unlawful misrepresentation,” said artist Daniel Edwards.

Other works by Edwards include “Landmark for Peace: The Martin Luther King Jr. and Robert F. Kennedy Memorial” located in Indianapolis, and The Hudson Institute’s James Doolittle Award, presented at the National Press Club in Washington D.C., of which Henry Kissinger, Dick Cheney, and Donald Rumsfeld have been some of its recipients.

“Treason Memorial: The Portrait of Tom Cotton,” will open to the public at CACA’s The Showroom, the world’s first public relations gallery, located in the Warehouse Arts District in St. Petersburg, Fla. on April 24, 2015. Contact Cory Allen at 323-393-3115 or visit http://www.cacanet.com/. 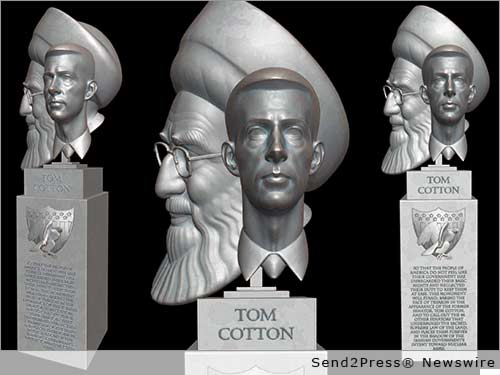 NEWS ARCHIVE NOTE: this archival news content, issued by the news source via Send2Press Newswire, was originally located in the Send2Press® 2004-2015 2.0 news platform and has been permanently converted/moved (and redirected) into our 3.0 platform. Also note the story “reads” counter (bottom of page) does not include any data prior to Oct. 30, 2016. This press release was originally published/issued: Thu, 02 Apr 2015 18:32:36 +0000

View More Entertainment News
"I felt compelled to create this memorial to never forget the senators who potentially damaged the U.S. over affairs as sensitive as nuclear arms in the Middle East. I hope we can resolve to be less apathetic about such unlawful misrepresentation," said artist Daniel Edwards.

LEGAL NOTICE AND TERMS OF USE: The content of the above press release was provided by the “news source” Daniel Edwards or authorized agency, who is solely responsible for its accuracy. Send2Press® is the originating wire service for this story and content is Copr. © Daniel Edwards with newswire version Copr. © 2015 Send2Press (a service of Neotrope). All trademarks acknowledged. Information is believed accurate, as provided by news source or authorized agency, however is not guaranteed, and you assume all risk for use of any information found herein/hereupon.