LOS ANGELES, Calif., Jan. 22, 2020 (SEND2PRESS NEWSWIRE) — For some it is a “secret code,” for others it is simply cursive handwriting. The annual Cursive is Cool® contests kick off on National Handwriting Day, celebrated around the world on Jan. 23 each year in honor of John Hancock’s birthday, the American Handwriting Analysis Foundation announced today. 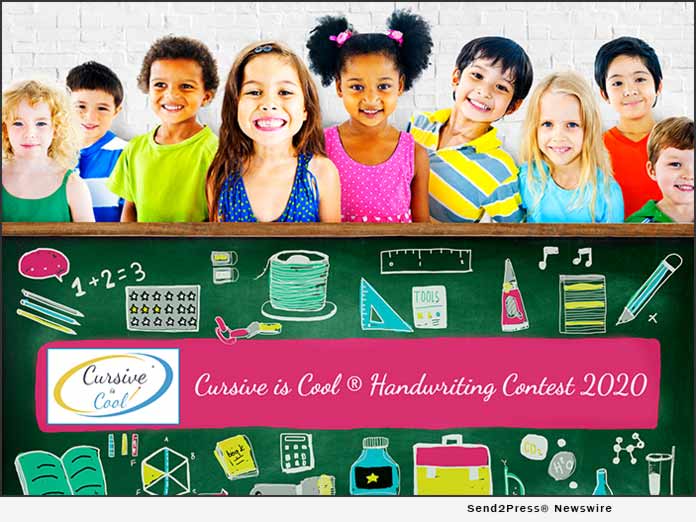 Legend has it that Hancock, known for his large and showy signature on the U.S. Declaration of Independence, made his signature extra-large so “King George can see it without his spectacles.”Campaign for Cursive® offers three contests: one in the USA and two in Canada (one for English writers, one for French). Students in Grades 1 – 6 have the chance to test their cursive skills and their creativity in answering one of the questions presented. The deadline for the USA contest is March 15; Canada contest in English has a March 13 deadline, and the Canada contest in French has a March 20 deadline.

Sheila Lowe, President of the American Handwriting Analysis Foundation (AHAF), is encouraged to see the contest continue and stated, “Happily, by our count, 25 states in the USA now have requirements to teach cursive, with others producing legislation to do the same. Our organization is proud to have helped.”

“Our international contests are ways for students to proudly showcase their achievement of mastering the alphabet in cursive. Kids tell us over and over how much they love writing in cursive,” remarked Gayna Scott, Chair of Campaign for Cursive®. “To them it could be their ‘secret code,’ the thrill of being able to sign their own name or enjoying how the pencils dances across the paper. The judges look forward to what precious thoughts they will come up with this year.”

The American Handwriting Analysis Foundation is a 501-(c)6 non-profit business organization, chartered and incorporated in California. Dedicated to the advancement of the handwriting sciences, AHAF promotes education for handwriting examiners at all levels of expertise and from all schools of thought, and are the sponsors of Campaign for Cursive®. Information: http://www.ahafhandwriting.org/.

View More Family and Parenting News
"Our international contests are ways for students to proudly showcase their achievement of mastering the alphabet in cursive. Kids tell us over and over how much they love writing in cursive," remarked Gayna Scott, Chair of Campaign for Cursive.

LEGAL NOTICE AND TERMS OF USE: The content of the above press release was provided by the “news source” American Handwriting Analysis Foundation or authorized agency, who is solely responsible for its accuracy. Send2Press® is the originating wire service for this story and content is Copr. © American Handwriting Analysis Foundation with newswire version Copr. © 2020 Send2Press (a service of Neotrope). All trademarks acknowledged. Information is believed accurate, as provided by news source or authorized agency, however is not guaranteed, and you assume all risk for use of any information found herein/hereupon.