"Acquiring HomeTeam is a great step and helps us expand our mobile reach," said Dave DuPont, CEO, TeamSnap. "More than any other time in our history, customers are excited about using TeamSnap's mobile app. It's fast, easy to use and fits into their on-the-go mobile lifestyle."

BOULDER, Colo., Dec. 3, 2014 (SEND2PRESS NEWSWIRE) — TeamSnap, used by 7 million people around the world to coordinate their sports and other ongoing group activities, today announced it has completed the acquisition of HomeTeam, a mobile app used to organize team rosters, schedules and contacts, developed by Silicon Valley’s Crescent Computing. Terms of the transaction were not disclosed.

This is the fourth acquisition TeamSnap has made since its 2009 inception. Past acquisitions include Easy Team Manager, WePlay and RTeamsite. This latest deal is intended to further accelerate the company’s mobile leadership in the sports team management market.

“Acquiring HomeTeam is a great step and helps us expand our mobile reach,” said Dave DuPont, CEO, TeamSnap. “More than any other time in our history, customers are excited about using TeamSnap’s mobile app. It’s fast, easy to use and fits into their on-the-go mobile lifestyle.”

TeamSnap’s stylish and highly interactive mobile app is already used millions of times each month. The company keeps modernizing the app – in fact, it recently introduced the TeamSnap Live! beta. TeamSnap Live! gives customers all-new, real-time features, such as live chat and score updating so they can keep up with games and activities even when they aren’t physically there.

“Joining forces with TeamSnap was the best and quickest way to get our customers the functionality they need and want,” said Stephen Fogel, founder, Crescent Computing. “TeamSnap’s messaging, scheduling and game availability features really make their app the quintessential team management tool.”

TeamSnap’s app is available on the iTunes App Store or Google Play.

About TeamSnap:
7 million users around the world use TeamSnap to coordinate sports and other ongoing activities. For more information, please visit http://www.TeamSnap.com/. 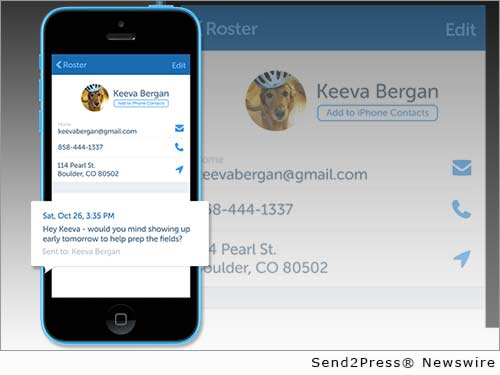 NEWS ARCHIVE NOTE: this archival news content, issued by the news source via Send2Press Newswire, was originally located in the Send2Press® 2004-2015 2.0 news platform and has been permanently converted/moved (and redirected) into our 3.0 platform. Also note the story “reads” counter (bottom of page) does not include any data prior to Oct. 30, 2016. This press release was originally published/issued: Wed, 03 Dec 2014 07:00:58 +0000

View More Boulder Business News
"Acquiring HomeTeam is a great step and helps us expand our mobile reach," said Dave DuPont, CEO, TeamSnap. "More than any other time in our history, customers are excited about using TeamSnap's mobile app. It's fast, easy to use and fits into their on-the-go mobile lifestyle."

LEGAL NOTICE AND TERMS OF USE: The content of the above press release was provided by the “news source” TeamSnap or authorized agency, who is solely responsible for its accuracy. Send2Press® is the originating wire service for this story and content is Copr. © TeamSnap with newswire version Copr. © 2014 Send2Press (a service of Neotrope). All trademarks acknowledged. Information is believed accurate, as provided by news source or authorized agency, however is not guaranteed, and you assume all risk for use of any information found herein/hereupon.