CUMBERLAND, Maine, Jan. 7, 2022 (SEND2PRESS NEWSWIRE) — According to the National Lightning Safety Council, the lightning death toll of 11 in 2021 set a new record for the fewest documented U.S. lightning deaths in a year. The previous low recorded by NOAA was 16 deaths in 2017. 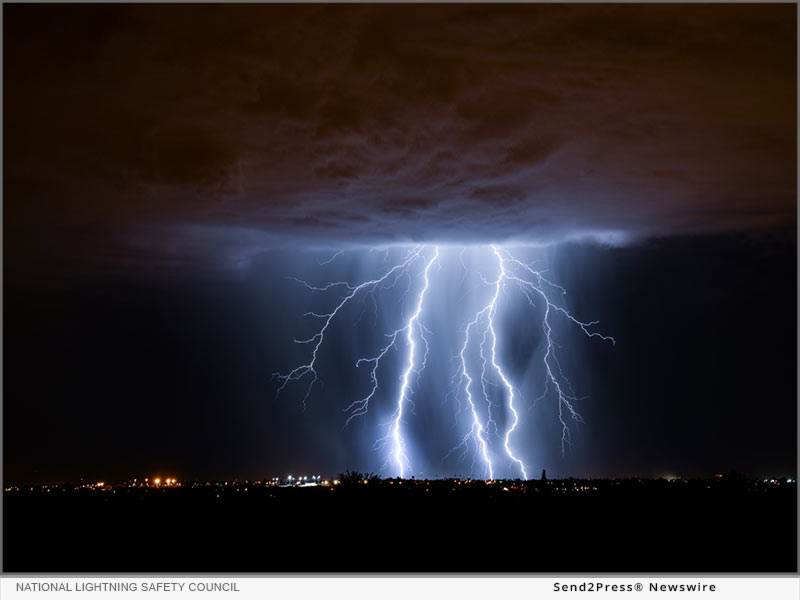 PHOTO CAPTION: A dramatic drop in U.S. lightning fatalities can be attributed to increased awareness efforts, including lightning safety campaigns, and the growing accessibility of weather information.

“This new low of 11 lightning deaths is dramatically fewer than the 432 Americans killed by lightning in 1943,” said John Jensenius, a lightning safety specialist with the National Lightning Safety Council (NLSC).

“With more than 194 million lightning events detected across the United States and 2.4 billion detected around the world in 2021, lightning safety should be a consideration during any outdoor activity,” said Chris Vagasky, a lightning data specialist with the National Lightning Safety Council.

Jensenius attributes the recent drop in lightning fatalities to increased awareness efforts, including lightning safety campaigns, and the growing accessibility of weather information.

“When the Lightning Safety Awareness Campaign began in 2001, the U.S. averaged 47 lightning fatalities a year,” Jensenius explained. “The average number of deaths for the past five years has now dropped to 17. It’s very rewarding to know that the campaign has been so successful.”

The record low in lightning deaths is an important milestone in the lightning safety awareness effort in light of a significant increase in U.S. and global lightning activity, as documented by Vaisala in its 2021 Annual Lightning Report. Amidst a constantly changing lightning landscape, the NLSC emphasizes the importance of continued vigilance against the capricious weather threat.

Visit the http://www.lightningsafetycouncil.org/ for shareable information, resources and safety tips.

Inquiries about specific lightning concerns can also be addressed to Council members via contacts here: http://www.lightningsafetycouncil.com/LSC-About.html.

View More General Editorial News
"With more than 194 million lightning events detected across the United States and 2.4 billion detected around the world in 2021, lightning safety should be a consideration during any outdoor activity," said Chris Vagasky, a lightning data specialist with the National Lightning Safety Council.

LEGAL NOTICE AND TERMS OF USE: The content of the above press release was provided by the “news source” National Lightning Safety Council or authorized agency, who is solely responsible for its accuracy. Send2Press® is the originating wire service for this story and content is Copr. © National Lightning Safety Council with newswire version Copr. © 2022 Send2Press (a service of Neotrope). All trademarks acknowledged. Information is believed accurate, as provided by news source or authorized agency, however is not guaranteed, and you assume all risk for use of any information found herein/hereupon.