LOS ANGELES, Calif. and WANGA PARISH, Uganda, Sept. 21, 2022 (SEND2PRESS NEWSWIRE) — Scientology Tools for Life are transforming communities in the hands of a dedicated team of local leaders and the Scientology Volunteer Ministers of Wanga Parish, Uganda. 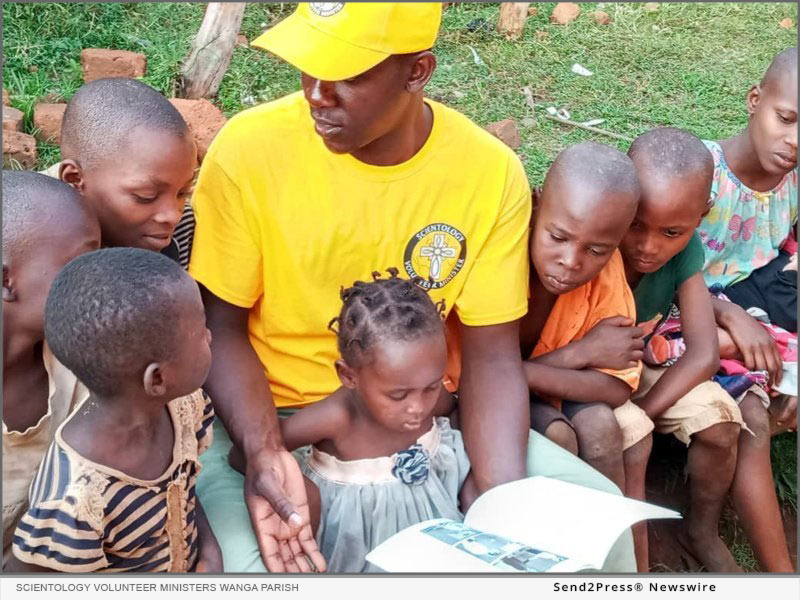 As the UN convenes in New York for the 77th General Assembly, delegates and world leaders are seeking solutions for building “a more sustainable and resilient world for all.” Some 7,000 miles away, district leaders in Eastern Uganda are making this dream a reality, thanks to the Scientology Volunteer Ministers of Wanga Parish.

It all began when Arthur Wamatsu learned about the Scientology Volunteer Ministers program and its 19 online courses from his aunt Millie. The whole family was amazed. Here was the technology to transform their birth village from one beset by poverty and despair to a place of hope and self-reliance.

The entire family trained on the 19 Scientology Tools for Life courses, the basic training for the Volunteer Ministers. They put their new skills into action.

Disease and natural disasters had taken their toll on the village, leaving 70 orphans in need of care and many families living on the edge of starvation.

The Volunteer Ministers raised funds to establish a medical clinic with a Volunteer Minister-trained nurse who provides basic health care along with Scientology assists—techniques developed by Scientology Founder L. Ron Hubbard that address the emotional and spiritual factors in stress and trauma.

More donations went to the purchase of seeds, chickens and pigs.

Next, they trained every adult in the village on the Tools for Life courses. The whole village took on planting the crops—maize, beans and rice to begin with. Everyone, including the children, took turns watering and weeding. The village has now brought in their first harvest, and they have added sweet potatoes and cassava to what they are growing. With what they have grown and the 130 eggs their chickens produce each day, there is plenty of food for the village.

The Volunteer Ministers helped the village establish an orphanage with a nursery school for the 30 younger children. More donations paid for the school uniforms for the 40 older children who are now attending school.

With enough food to feed themselves, they plan to raise and sell chickens and pigs and expand their operation.

Word spread of the transformation of the parish and the Nalonda sub-county chair could hardly believe the change. He decided to study the courses himself.

“I have learned so much that I will use to improve my leadership skills,” he said. “It would have been so easy for me if I’d known all this before. I have been finding my work very challenging, but today I gained the solutions.” How to investigate to find the cause of difficulties and how to resolve conflicts were the courses he found the most valuable. He sees they will ease any leadership difficulties for the rest of his tenure.

He then invited all 186 sub-county leaders representing 10,000 villagers to take the courses. They all agreed. He helped set up a training center in Wanga Parish to serve the entire district and beyond. And he transported all the sub-county leaders to the week-long training.

“From the very first day of this training today it has been a period full of knowledge,” said Namataka Agnes, 34, one of the sub-county leaders. “So much wisdom actually. I have learned so much that I didn’t know and never thought I could learn from anywhere ever. I am so excited. They say hope is the pillar of the world, but I say it is wisdom. So many people in this community are lagging behind. With these courses taught to them, they will be empowered and help each other move forward. Many don’t know how to handle kids, solve simple marriage conflicts, how to communicate. Just imagine when all these courses are taught to them. The community will be so empowered and ready to move forward.”

The Volunteer Minister’s mandate is to be “a person who helps his fellow man on a volunteer basis by restoring purpose, truth and spiritual values to the lives of others.” Their creed: “A Volunteer Minister does not shut his eyes to the pain, evil and injustice of existence. Rather, he is trained to handle these things and help others achieve relief from them and new personal strength as well.”

For more information, visit the Volunteer Ministers website. To arrange a live seminar, fill out the form on their website.

CAPTION: Scientology Volunteer Ministers: Creating a better future for the local children of Wanga Parish, Uganda and the entire region.