Van Wert City Schools expects to save more than $115,000 annually through partnership with Energy Optimizers, USA

TIPP CITY, Ohio, July 12, 2019 (SEND2PRESS NEWSWIRE) — Van Wert City Schools, in partnership with Energy Optimizers, USA, is poised to launch a sweeping energy and security improvement project that is expected to save the district more than $115,000 annually. 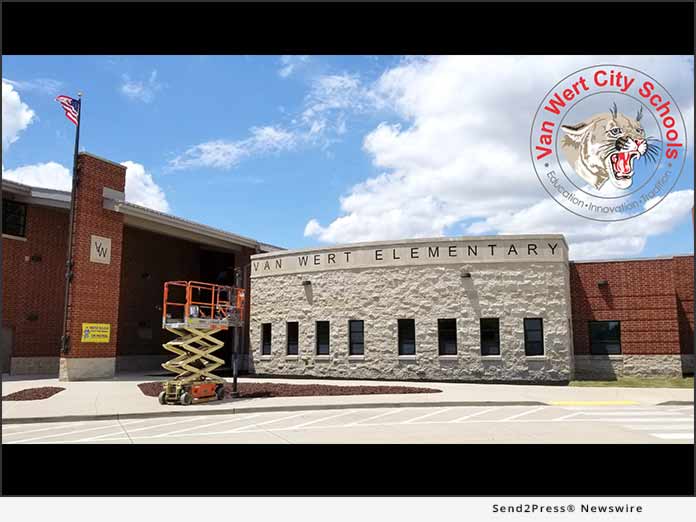 Starting this month, Energy Optimizers, USA, will begin work to:

The project is expected to wrap up by mid-August, before the start of school.

“We are thrilled to be partnering with Energy Optimizers, USA, on a project that will not only improve our energy performance, but also the quality of our classrooms and auditorium,” said Vicki Brunn, Superintendent. “The savings we attain from these relatively simple measures will be channeled directly into the innovative programs that make our district—and community—stand at a level above the rest.”

The school district’s biggest payback will come from the lighting retrofits. The new lighting will deliver savings of up to 75 percent over the existing fluorescent technology. It will also last five to six times longer than the district’s current lighting systems.

The LED lighting systems will also improve the classroom experience for students and staff alike. State-of-the-art flat-panel LED systems offer sleek, low-profile lighting without the hum and flicker associated with fluorescents. The flat-panel LEDs also allow for stronger light distribution than fluorescents while the fixtures provide full dimming capabilities, features that are in high demand in educational settings.

The district will also realize significant savings from the upgraded lighting and HVAC controls. This component will include occupancy and daylight sensors to reduce wasted electricity as well as controls and programming upgrades to maximize the efficiency of the heating and cooling systems.

When combined, all of the energy conservation measures will be equivalent to removing 177 cars from the road or saving 271 acres of trees.

“Best of all—we will do this without needing to request additional funds from our taxpayers,” Brunn said.

VWCS will use the LED Lighting and Energy Savings Program through the Ohio Council of Educational Purchasing Consortia (OCEPC). This program will enable the district to make these cost-cutting improvements at no additional expense to taxpayers while ensuring the best possible pricing.

“Van Wert City Schools has received well-earned accolades at the local, state and national levels for academic innovation and performance,” said Greg Smith, founder of Energy Optimizers, USA. “This project is a natural reflection of the district’s application of evidence-based strategies in pursuit of better results. In this case, those results will take the form of measurably lower utility bills and more funding for classrooms.”

View More Building Projects News
"We are thrilled to be partnering with Energy Optimizers, USA, on a project that will not only improve our energy performance, but also the quality of our classrooms and auditorium," said Vicki Brunn, Superintendent.

LEGAL NOTICE AND TERMS OF USE: The content of the above press release was provided by the “news source” Energy Optimizers USA or authorized agency, who is solely responsible for its accuracy. Send2Press® is the originating wire service for this story and content is Copr. © Energy Optimizers USA with newswire version Copr. © 2019 Send2Press (a service of Neotrope). All trademarks acknowledged. Information is believed accurate, as provided by news source or authorized agency, however is not guaranteed, and you assume all risk for use of any information found herein/hereupon.