MIAMI, Fla. – Dec. 7 (SEND2PRESS NEWSWIRE) — The “deathbed” portrait of Fidel Castro that outraged Cuban exiles everywhere in part for a scheduled display in Miami this weekend has been replaced with “Monument to Pro-Life: The Birth of Sean Preston.” The renowned nude of Britney Spears giving birth atop a bearskin rug appears at Fountain Miami, courtesy of Capla Kesting Fine Art, from December 7th to 11th in Wynwood Gallery district during Art Basel Miami. 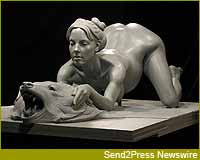 Capla Kesting exhibited “Monument to Pro-Life” in April, prompting a “shocked and dumbfounded” Britney Spears to say, “They can show it anywhere they want, just not in my beautiful home!”

The Britney sculpture drew thousands of angry emails, “though not quite as passionate as those regarding ‘Fidel Castro’s Deathbed Portrait,'” said a spokesman. Concerns poured in from Cuban-Americans protesting the Castro portrait, originally scheduled for unveiling in Central Park, for its partial inspiration from Harlem’s acclamation for Castro’s contributions to civil rights.

Miami’s El Traketeo on WRTO 98.3 arranged for artist Daniel Edwards to come to their studio to hear face to face testimonies from several dozen Cuban exiles who have suffered under Castro. After several hours, Edwards said on the air, “I’m only sorry I wasn’t aware of all that pain before my project started. After hearing all these painful accounts, in good conscience, as a friend of the Cuban-American communities, I cannot show the sculpture in Central Park.” WRTO and the artist made arrangements the following week for the public destruction of the colossal Castro portrait, in Miami.

This week, NPR’s Latino USA aired a documentary with Daniel Edwards and the controversy over his “Castro Deathbed Portrait.” A podcast of that broadcast titled, “Castro’s Death-Mask,” by Carole King can be found in program 713 at http://www.latinousa.org/program/index.html . “Castro in Central Park” by filmmaker A.D. Calvo also documents the controversy and appears on YouTube at http://www.youtube.com/watch?v=nmc62sXgv30