SecuGen and Lucky Technology Bring Greater Security to US Based Schools

The iGuard is used to authenticate students entering and existing school facilities using fingerprints that cannot be lost, stolen or forgotten. With the iGuard’s network capability and built-in controls, school administrators are able to immediately lock down every door on campus or selectively lock doors where incidents may have occurred. Local law enforcement and fire department personnel can have pre-registered fingerprints for emergency school access. If a breach of security has been determined, the school administration can immediately lock down all doors while still allowing access by first responders.

“Since we have switched to the SecuGen SDA03M fingerprint module, we have seen the failure rate of our devices plummet,” stated Wayne Wilkerson, President of US Operations for Lucky Technology. “Our customers are exceedingly happy with the reliability of our product. It is no exaggeration to say that SecuGen has helped us to improve our product and our business.”

Jeff Brown, VP of Sales for SecuGen said, “Our fingerprint technology cannot operate in a vacuum. We rely on partnerships with knowledgeable manufacturers to develop finished security devices. Clearly, Lucky Technology has done a stellar job in creating the iGuard series of access control devices. Their success is directly attributable to their ability to understand and solve customers’ security problems.”

“We are always working to deliver reliable, accurate, and affordable products for our developer partners,” added Won Lee, CEO of SecuGen. “We are very pleased with Lucky Technology’s marketplace success, and we are honored that they feel that our fingerprint technology is part of that success.”

About Lucky Technology:
Lucky Technology was founded in early 1999 with its embedded web server, plug and play internet device called iGuard. Aimed at the access control and time attendance market, iGuard has become the product of choice for thousands of applications where web connectivity with ease of deployment is a major advantage. Based in Kowloon, Hong Kong with a growing world presence, the Lucky Technology has US headquarters located in Satellite Beach, Florida with strategic distribution partners in Freeland, Washington, Chicago, Illinois and Titusville, Florida. 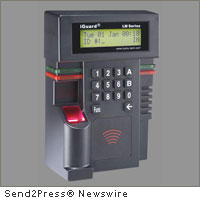 NEWS ARCHIVE NOTE: this archival news content, issued by the news source via Send2Press Newswire, was originally located in the Send2Press® 2004-2015 2.0 news platform and has been permanently converted/moved (and redirected) into our 3.0 platform. Also note the story “reads” counter (bottom of page) does not include any data prior to Oct. 30, 2016. This press release was originally published/issued: Tue, 25 Jan 2011 12:59:16 +0000