SANTA CLARA, Calif., May 10, 2011 (SEND2PRESS NEWSWIRE) — SecuGen, the world’s leading optical fingerprint device vendor, is pleased to announce the availability of the SDA03M-WR, SDA04M-WR and SDA04-WR, water resistant OEM fingerprint modules intended for integration into IP-65 rated access control units and other devices made for outdoor use. The sensor components of these fingerprint modules are sealed around the edges of the platen to prevent water seepage into the sensor itself.

SDA Series OEM modules combine a fingerprint sensor and a board containing algorithms to extract and match fingerprint templates. The SDA03M as well as the water resistant version can hold up to 3,000 users’ fingerprint templates while the SDA04M and SDA04 can hold up to 10,000. The SDA04 is a FIPS 201 certified unit that is listed on the General Services Administration’s FIPS 201 Approved Products List (APL) for use in the Federal Government’s Personal Identity Verification (PIV) program.

SecuGen Corporation is known around the world for manufacturing very accurate, rugged and affordable fingerprint sensors for a wide range of uses. SecuGen products are sold through Original Equipment Manufacturers (OEMs), Independent Software Vendors (ISVs) as well as Value Added Resellers (VARs) and Systems Integrators (SIs) in over 75 countries worldwide.

“Many of our OEM partners develop access control devices for both indoor and outdoor use,” says Dan Riley, VP of Engineering for SecuGen. “A growing number of them have obtained an IP-65 rating for their products. Their end-user customers require fingerprint biometric devices that can be mounted outdoors and that can withstand even inclement weather. Our new water resistant SDA Series OEM modules were designed to satisfy this requirement.”

Won Lee, CEO of SecuGen, added, “At SecuGen, we work continuously to fulfill the requirements of our partners. Water resistant OEM fingerprint modules are our most recent response to these requirements. We are always seeking to expand our offerings in a way that satisfies the needs of our reseller partners and broadens their ability to meet the demands of the marketplace. That is our number one job.”

SecuGen(R) is a registered trademark of SecuGen Corp. in the United States and other countries. 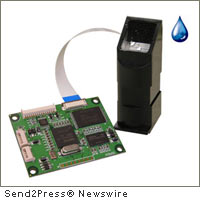 NEWS ARCHIVE NOTE: this archival news content, issued by the news source via Send2Press Newswire, was originally located in the Send2Press® 2004-2015 2.0 news platform and has been permanently converted/moved (and redirected) into our 3.0 platform. Also note the story “reads” counter (bottom of page) does not include any data prior to Oct. 30, 2016. This press release was originally published/issued: Tue, 10 May 2011 10:59:45 +0000