“Daniel is commenting on how young celebrities grow up too fast in the media – how they are often sexualized too soon,” said the artist’s representative Cory Allen.

“It would be naive and hypocritical for anyone to be offended by this simple sculpture, yet be apathetic towards the plethora of images to which they subject themselves on a daily basis,” said Daniel Edwards, “I stand by the work.”

About Daniel Edwards:
Daniel Edwards is a professor of sculpture at the New York Academy of Art, who also publishes books on art at independent publishing house AppleParrot. His past works include “Monument to Pro-Life,” which featured Britney Spears giving birth on a bearskin rug, a portrait bust of Hillary Clinton imagined as the first woman president of the United States, which exhibited at New York’s Museum of Sex, and “Paris Hilton Autopsy,” an interactive sculpture of Hilton, which warned teenagers about the hazards of driving under the influence. 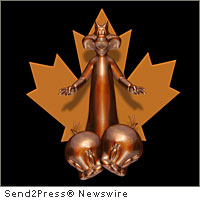 NEWS ARCHIVE NOTE: this archival news content, issued by the news source via Send2Press Newswire, was originally located in the Send2Press® 2004-2015 2.0 news platform and has been permanently converted/moved (and redirected) into our 3.0 platform. Also note the story “reads” counter (bottom of page) does not include any data prior to Oct. 30, 2016. This press release was originally published/issued: Wed, 24 Aug 2011 17:57:14 +0000

LEGAL NOTICE AND TERMS OF USE: The content of the above press release was provided by the “news source” Daniel Edwards or authorized agency, who is solely responsible for its accuracy. Send2Press® is the originating wire service for this story and content is Copr. © Daniel Edwards with newswire version Copr. © 2011 Send2Press (a service of Neotrope). All trademarks acknowledged. Information is believed accurate, as provided by news source or authorized agency, however is not guaranteed, and you assume all risk for use of any information found herein/hereupon.