This new version of the Hamster IV fingerprint reader retains the high image quality, rugged design and affordable price of the previous version and adds faster image capture and compatibility with both USB 1.1 and USB 2.0. SecuGen will be releasing the Hamster IV v2 at a date to be announced.

The Hamster IV v2 is part of SecuGen’s growing line of fingerprint biometric products that are PIV compliant, as defined by the FIPS 201 standard. This line also includes the iD-USB SC/PIV(TM) that combines fingerprint and smartcard readers, the SDA04 OEM module for use in physical access devices, the SDU04P OEM sensor for use in USB peripherals, and SecuGen’s Pro SDKs for the development of FIPS 201/PIV software applications. SecuGen PIV compliant products are used in a growing number of U.S. government, civilian, and military agencies and increasingly by governments and corporations around the world.

Dan Riley, SecuGen’s VP of Engineering said, “Our partners include a significant number of U.S. government integrators. Our efforts are always focused on providing those partners with the best possible fingerprint technologies, products, and components. The Hamster IV v2 is another response to our partner’s needs.”

“We are very pleased that our Hamster IV v2 product meets FBI specifications for PIV,” said Won Lee, CEO of SecuGen. Mr. Lee continued, “FIPS 201 is an important milestone for the biometrics industry. It sets rigorous standards for the quality and performance of both fingerprint hardware and software, and we are proud to offer our partners both. The FBI’s PIV testing ensures excellent image quality of the fingerprint hardware, while NIST’s MINEX testing ensures accuracy and interoperability of fingerprint template extraction and matching algorithms. The industry has accepted these rigorous standards because they are supported by objective, third-party certification.”

SecuGen(R) is a registered trademark of SecuGen Corp. in the United States and other countries. 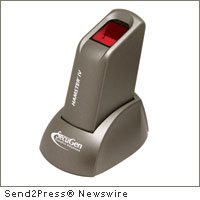 NEWS ARCHIVE NOTE: this archival news content, issued by the news source via Send2Press Newswire, was originally located in the Send2Press® 2004-2015 2.0 news platform and has been permanently converted/moved (and redirected) into our 3.0 platform. Also note the story “reads” counter (bottom of page) does not include any data prior to Oct. 30, 2016. This press release was originally published/issued: Wed, 12 Oct 2011 08:59:29 +0000