ASHEVILLE, N.C., June 23, 2017 (SEND2PRESS NEWSWIRE) — In response to multiple requests, Cottage Cooking, a cooking class business in Asheville, N.C., has decided to add off-site services. In the past, they’ve given on-site cooking classes in a private home (and still do), but now they’re also taking the show on the road. 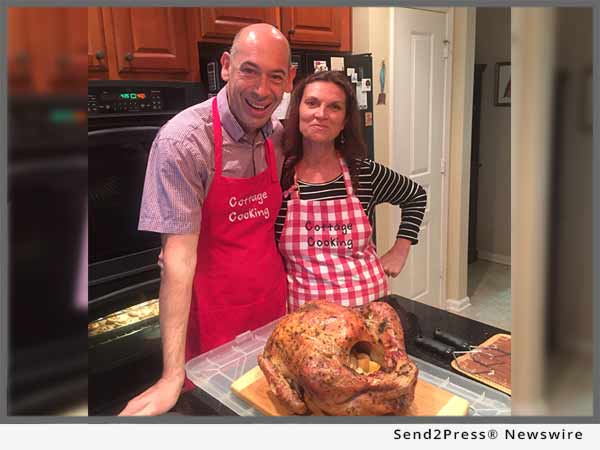 “Our renovated 1950s-style ranch home in North Asheville is the perfect setting for two to four people, but we’ve had many requests to go off-site for things like corporate team building activities, bachelorette weekends and family reunions,” Liisa Andreassen, co-founder Cottage Cooking, says. “People really like the fact that we come to them because then they can really let their hair down.”

To date, Andreassen and her partner and husband, John Godts, have done a few off-site events including a corporate training where the class participants made ravioli and Bolognese sauce and a three-generation family reunion where a grandmother, her two daughters and three grandchildren tried their hands at wonton soup and coconut-baked shrimp.

“It’s fun for us too,” Godts says. “We get to see some cool houses and it’s always fun to work in another kitchen. It shakes things up a little.”

While there’s a $15 upcharge per person for going off site, people seem to think it’s worth it. It saves them travel time and they can play host. In order to book an off-site class, a minimum of four participants is required and it needs to be within an hour drive.

“We’ve even been asked to give classes at local colleges and assisted living communities,” Andreassen says.

For now, they’re trying not to exceed 10 people per class so they can maintain the intimate-style of teaching and learning that they’ve earned a reputation for since being in business.

Godts and Andreassen have both taken classes in larger groups and agree that a smaller venue is the way to go.

“I found those big classes to be intimidating and not a lot of fun,” Godts says. “Our goal is to have some laughs, prepare and eat good food and hope people learn something along the way too.”

About Cottage Cooking Asheville:
Founded in March 2015 by John Godts and Liisa Andreassen, Cottage Cooking was started to fund the couple’s appetite for travel. Cooking classes are designed for the home cook and a typical class is designed like a dinner party where guests prepare and eat an appetizer, main course and dessert.

View More Food and Beverage News
"Our renovated 1950s-style ranch home in North Asheville is the perfect setting for two to four people, but we've had many requests to go off-site for things like corporate team building activities, bachelorette weekends and family reunions," says Liisa Andreassen.

ABOUT THE NEWS SOURCE:
Cottage Cooking

Cottage Cooking is a cooking class business in Asheville, N.C., where their motto is, "Enter as strangers, but leave as friends." John Godts and Liisa Andreassen, owners of Cottage Cooking, had no idea that when they started their cooking class business that there would be such a demand for their services. Cottage Cooking was started to fund the couple's passion for travel. Cooking classes are designed for the home cook and a typical class is designed like a dinner party where guests prepare and eat an appetizer, main course and dessert.

LEGAL NOTICE AND TERMS OF USE: The content of the above press release was provided by the “news source” Cottage Cooking or authorized agency, who is solely responsible for its accuracy. Send2Press® is the originating wire service for this story and content is Copr. © Cottage Cooking with newswire version Copr. © 2017 Send2Press (a service of Neotrope). All trademarks acknowledged. Information is believed accurate, as provided by news source or authorized agency, however is not guaranteed, and you assume all risk for use of any information found herein/hereupon.