Imlach and Collins Brothers Named Mover of the Year for 2017

DALLAS, Texas, April 11, 2018 (SEND2PRESS NEWSWIRE) — Move For Hunger today announced that Imlach & Collins Brothers, an Atlas Van Lines agent, has been named its “Mover of the Year.” In 2017, Imlach & Collins Brothers delivered more than 100,000 lbs. of food to the North Texas Food Bank – which is enough to provide 85,500 meals. The award was presented at the American Moving & Storage Association’s 2018 Education Conference and Expo in Fort Lauderdale, Fla. 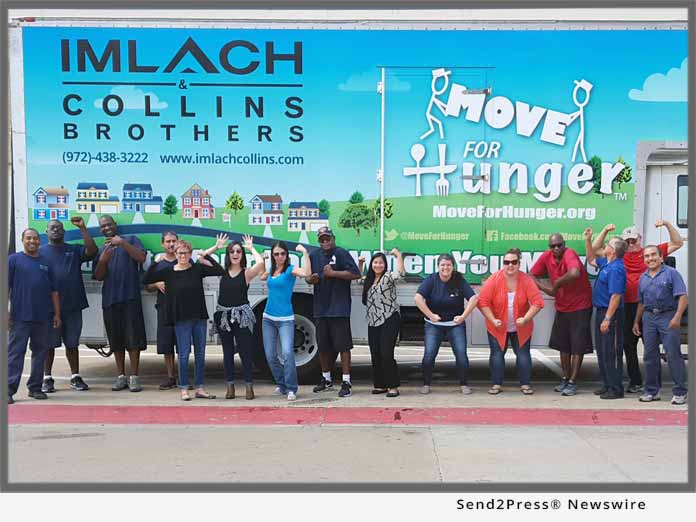 Move For Hunger is a 501(c)(3) non-profit organization that mobilizes the relocation industry to fight hunger and reduce food waste.

People tend to throw a lot of “stuff” away when they move, including perfectly good food. As part of Move For Hunger’s national network of relocation professionals, Imlach & Collins Brothers provides their customers with the opportunity to donate unopened, non-perishable food during the moving process and volunteers to deliver the donations to the local food bank, free of charge.

Imlach & Collins Brothers’ partnership with Move For Hunger also led to their participation in the North Texas Food Bank’s Food 4 Kids program. Students who receive free or reduced-cost meals at school often face hunger during the weekend. Food 4 Kids provides at-risk children with backpacks full of nutritious, non-perishable food to take home on Fridays during the school year. Once a month, Imlach & Collins Brothers sends a truck and two crew members to pick up and deliver the backpacks to three different school districts in the Dallas area.

“We are so proud to be associated with Move For Hunger and to help support this great cause,” said Gregg Imlach, CEO of Imlach & Collins Brothers. “It brings a sense of energy and fulfillment to our staff to know that we are making a difference in so many lives.”

More than 42 million Americans, including 1 in 6 children, are food insecure – they lack reliable access to a sufficient quantity of affordable, nutritious food. Meanwhile, 40 percent of all the food produced in the U.S. each year ends up in a landfill or is left to rot in a field. Imlach & Collins Brothers recognized the tragedy of so much food going to waste when so many people don’t have enough to eat, and joined Move For Hunger in 2012 to help provide meals to their neighbors in need.

There are more than 850 moving companies in the Move For Hunger network, but Imlach and Collins Brothers is one of just two that have delivered more than 400,000 meals.

Move For Hunger mobilizes the relocation industry to fight hunger and reduce food waste. In addition to collecting food from people who are moving to new homes, Move For Hunger helps companies and individuals across the United States and Canada organize successful food drives. To date, they have collected more than 10 million pounds of food. For more information, or to find out how you can host your own food drive, visit http://www.moveforhunger.org/.

The American Moving & Storage Association (AMSA), home of the ProMover certification program, is the national trade association representing the nation’s moving and storage companies, which provide household goods moving services, specialized transportation for sensitive freight such as computers and trade show exhibits, and warehouse storage services. AMSA has approximately 4,000 members, including domestic and international companies and industry suppliers, and supports programs and activities that promote consumer protection, professional development, safety, and operational efficiency. Find out more at https://www.moving.org/ and https://www.moving.org/.

View More NonProfit and Charities News
"Every month, Imlach and Collins Brothers is delivering more than 10,000 pounds of food to hungry children in Dallas," said Adam Lowy, Executive Director of Move For Hunger.

LEGAL NOTICE AND TERMS OF USE: The content of the above press release was provided by the “news source” Move For Hunger or authorized agency, who is solely responsible for its accuracy. Send2Press® is the originating wire service for this story and content is Copr. © Move For Hunger with newswire version Copr. © 2018 Send2Press (a service of Neotrope). All trademarks acknowledged. Information is believed accurate, as provided by news source or authorized agency, however is not guaranteed, and you assume all risk for use of any information found herein/hereupon.