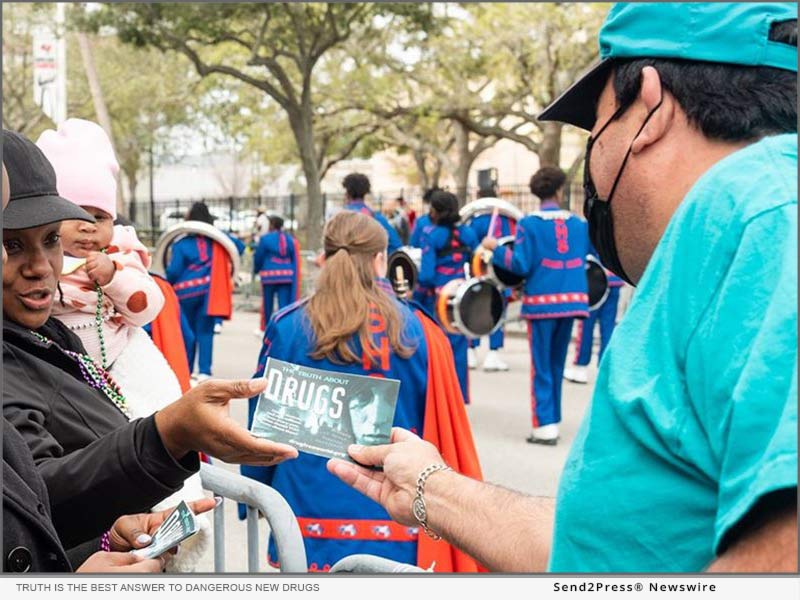 With a powerful new synthetic opioid known as ISO (isotonitazene) leaving disaster in its wake, the need for effective drug education and prevention has never been greater than now. Scientologists used this UN Day to introduce their communities to a program that can save lives.

The Pennsylvania-based Center for Forensic Science Research and Education estimates that ISO is 10 times more powerful than fentanyl, the drug responsible for the spike in overdose deaths in the United States.

Florida Attorney General Ashley Moody warned the drug is “so strong that it can kill just by coming in contact with someone’s skin or being accidentally inhaled. ISO has already been linked to overdose deaths in Florida.” And she urges people to “please, never take any illicit drug and know that using just one time could cost you your life.”

The UK has also seen an increase in drug poisoning deaths during the pandemic with approximately two-thirds of the deaths related to opioids. The British Medical Journal states isotonitazene “is 500 times more potent than morphine.”

Scientology Churches and Missions sponsor chapters of Foundation for a Drug-Free World. Volunteers share the Foundation’s Truth About Drugs initiative with local families, educators, school resource officers and anyone wishing to prevent senseless overdose deaths and help youth get off to a good start in life.

One of the key elements of the Foundation’s drug education and prevention materials is the award-winning Truth About Drugs—Real People, Real Stories documentary. It features interviews with former addicts who lived to tell the tale. And a common thread in their stories is that:

It isn’t enough to tell kids to “say ’No’ to drugs.” They have to understand why. That is what makes the Truth About Drugs so effective. By watching the videos and reading the youth-friendly booklets, young people can make the self-determined decision to do what experts say is the only foolproof way of avoiding overdose deaths in this age of designer additives: Simply do not experiment with illicit drugs in the first place.

Foundation for a Drug-Free World is a secular nonprofit public benefit corporation that empowers youth and adults with factual information about drugs so they can make informed decisions and live drug-free. The Foundation oversees the Truth About Drugs campaign and coordinates an international network of volunteers brought together by their common purpose to create a drug-free world.

Grown to a network of thousands of volunteers in more than 200 chapters around the world, the Foundation partners with some 1,800 groups and organizations.

The Scientology Network original series Voices for Humanity documents the kind of change this initiative can accomplish:

Learn more about the Truth About Drugs initiative and Foundation for a Drug-Free World on the Scientology Network. Since launching with a special episode featuring Scientology ecclesiastical leader Mr. David Miscavige, Scientology Network has been viewed in 240 countries and territories worldwide in 17 languages.