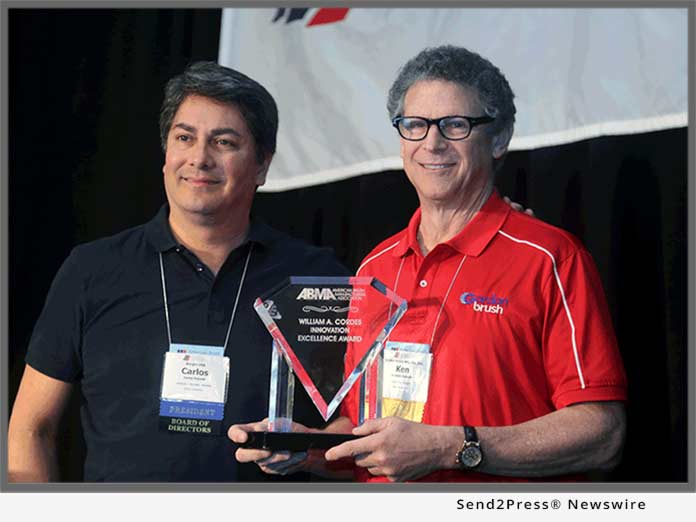 The patent-pending PlateScrape, when filled to its capacity of 4.5 gallons of water (slightly above the brushes), is ready to use. Just glide one plate at a time in between the brushes to easily scrape off any remaining food waste on the plate. The 4.5 gallons can be used for washing at least 200-400 plates and can continue to be used, until the plates come out clean and pre-sanitized.

The current method of cleaning plates in commercial kitchens uses spray nozzles which use over 1 gallon of water per minute and wastes environmental resources. PlateScrape reduces multiple utility bills and the environmental footprint by its pre-sanitizing method. PlateScrape not only saves an enormous amount of water, it also saves significant manpower dollars in contrast to the traditional spray-off methods. 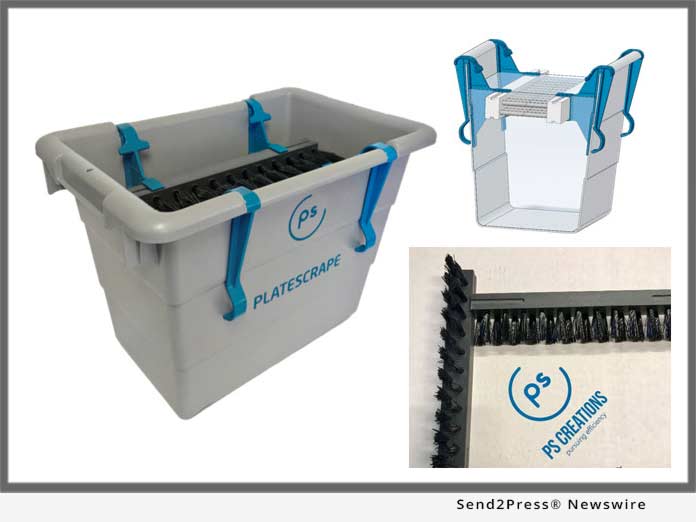 The PlateScrape is estimated to be able to save over one hundred billion (100,000,000,000) gallons of water annually in the United States alone, with a similar savings in contaminated water that needs to be processed through sewer treatment systems. Factoring in the natural or propane gas needed to heat the water will also save trillions of cubic feet of gas. Combining the savings from water, sewerage treatment, gas, and labor will save $20 to $30 billion annually.

The William A. Cordes Innovation Excellence Award is given out by the American Brush Manufacturers Association (ABMA), is to recognize outstanding innovation in any manufactured product, component or service in the brush industry in any given year. The award is named after William Cordes, who served as the Association’s first President from 1917-1928. This award serves as a constant reminder that all new and exciting endeavors have beginnings that connect with real people. 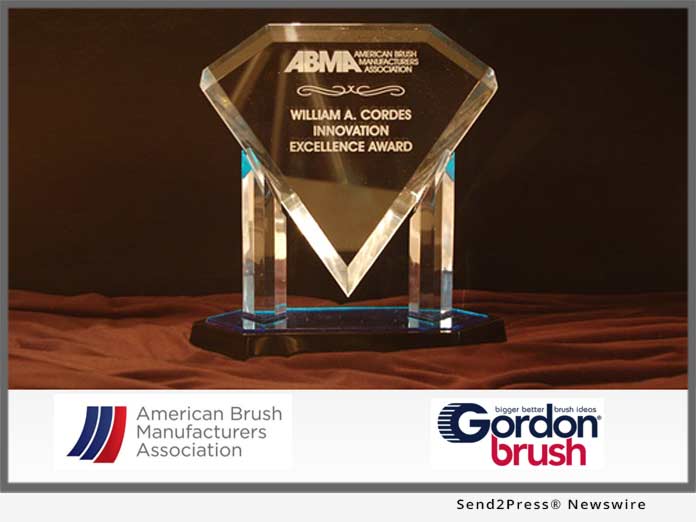 Ken Rakusin, President and CEO of Gordon Brush notes, “On behalf of PlateScrape, I’m delighted that we won this prestigious award from the American Brush Manufacturers Association. It was truly a collaborative effort between Gordon Brush and PlateScrape. This product adds to the long list of great American made brushes and ties into the Company’s mantra of being, ‘Proud To Be An American Manufacturer.’”

“The PlateScrape product will become a disruptive force in the food service industry to clean dirty plates by reducing labor time, saving billions of gallons of water, and billions of dollars in energy costs. We thank Gordon Brush for collaborating with us on this product,” said Nate Stein, President of PlateScrape.

Gordon Brush Mfg. Co., Inc., is an ISO 9001:2008 certified American manufacturer of brooms and brushes. Established in 1951, Gordon Brush® includes two brands whose origin dates back to 1855 and 1897. All told, the Company is comprised of seven brands. Gordon Brush® manufactures the FootMate® System and over 15,000 standard and custom brushes, selling to a multitude of industries including: janitorial, medical, electronics, manufacturing, military, aerospace, and pharmaceutical in its state-of-the-art, 183,000 sq. ft. manufacturing facility in the City of Industry, Calif.

Gordon Brush® has made brushes for the United States Army to clean the main gun on the Abrams tanks, saving the Department of Defense over $1.5 billion. The Company also has made brushes that were used on the space shuttle, the lunar module, and brushes to clean the guidance system and guns on the Apache helicopter. Gordon Brush® manufactures brushes that grow microorganisms used as alternative energy sources; that are used by the FBI for fingerprinting crimes scenes; and for complex circuit boards in the computer industry. Gordon Brush® has patents pending on stadium sweepers that are changing the way America cleans its greatest sports stadiums and theatre chains.

Gordon Brush® has been featured on the ION Network, Discovery Channel, Bloomberg News, and in the Los Angeles Times.

View More Restaurant Hotel and Hospitality News
"The PlateScrape product will become a disruptive force in the food service industry to clean dirty plates by reducing labor time, saving billions of gallons of water, and billions of dollars in energy costs. We thank Gordon Brush for collaborating with us on this product," said Nate Stein, President of PlateScrape.

LEGAL NOTICE AND TERMS OF USE: The content of the above press release was provided by the “news source” Gordon Brush Mfg. Co., Inc. or authorized agency, who is solely responsible for its accuracy. Send2Press® is the originating wire service for this story and content is Copr. © Gordon Brush Mfg. Co., Inc. with newswire version Copr. © 2018 Send2Press (a service of Neotrope). All trademarks acknowledged. Information is believed accurate, as provided by news source or authorized agency, however is not guaranteed, and you assume all risk for use of any information found herein/hereupon.