TAMPA, Fla., Jan. 26, 2022 (SEND2PRESS NEWSWIRE) — January is Human Trafficking Prevention Month and the Scientology Network invites viewers to watch an episode of “Voices for Humanity” featuring a Tampa Bay Area entrepreneur who is dedicated to saving kids from modern-day slavery. 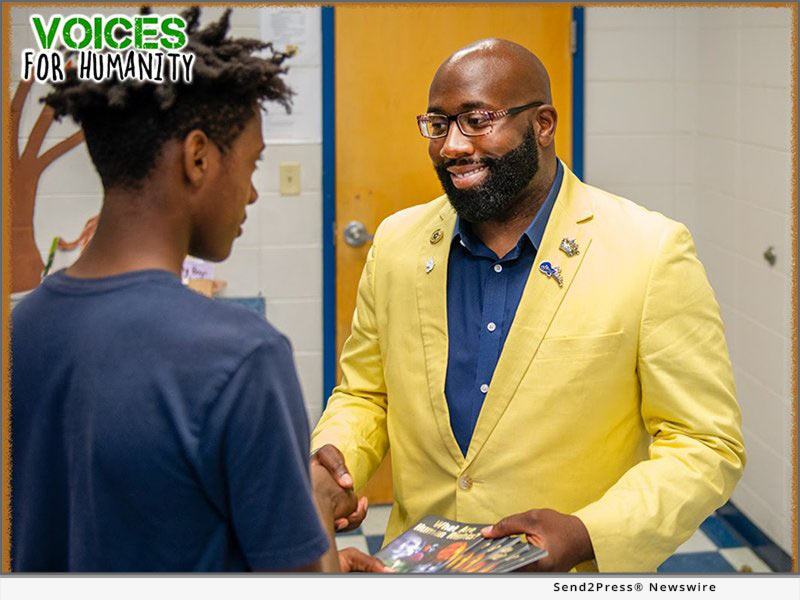 PHOTO CAPTION: “Voices for Humanity” features Christopher King, who educates kids on their human rights to protect them from sex trafficking.

The U.S. Department of Justice estimates that 200,000 American children are at risk of being trafficked into the sex industry each year,

Christopher King, fashion designer, U.S Marine veteran and grandson of blues legend BB King, founded the nonprofit The Gentlemen’s Course to save kids from human trafficking and any form of human rights abuse and to provide them with the moral compass and social skills they need to thrive.

Florida is the third-busiest hub for child sex trafficking in the United States.

“We’re talking about kids being sold, traded, forced against their own will,” says King in his episode of “Voices for Humanity.” “No one should be a slave, and no one has the right to enslave anyone.”

King learned of Youth for Human Rights International on a visit to the United for Human Rights headquarters in Clearwater, Florida. “That gave me a guide on how to educate youth. At that point, I founded The Gentlemen’s Course.”

King and his team bring his programs right to the kids.

“Human traffickers, they’re in the schools. They’re on social media. They’re getting the kids on their platforms,” says King. “So we might as well attack them on the same ground. If people knew their rights, they would know what to defend. That is the purpose. That’s our goal.”

Youth for Human Rights International materials help people of all ages understand the 30 rights enshrined in the Universal Declaration of Human Rights. Creating a world where human rights are known and protected starts with effective educational programs that reach across all cultural and geographic boundaries.

Since launching with a special episode featuring Scientology ecclesiastical leader Mr. David Miscavige, Scientology Network has been viewed in 240 countries and territories worldwide in 17 languages. Broadcast from Scientology Media Productions, the Church’s global media center in Los Angeles, the Scientology Network is available on DIRECTV Channel 320 and can be streamed on Scientology.tv, mobile apps and via the Roku, Amazon Fire and Apple TV platforms.

*Caption: “Voices for Humanity” features Christopher King, who educates kids on their human rights to protect them from sex trafficking.

View More Broadcasting and Podcasting News
"We're talking about kids being sold, traded, forced against their own will," says King.