MACON, Ga., April 17, 2020 (SEND2PRESS NEWSWIRE) — LBA Ware™, a leading provider of incentive compensation management (ICM) and business intelligence software solutions for the mortgage industry, today released summary statistics on the state of mortgage industry compensation in the first quarter of 2020. The firm’s analysis of data from its CompenSafe™ ICM platform shows business grew significantly for lenders across Q1, culminating in March commission payouts that were the highest reported in the last six months. 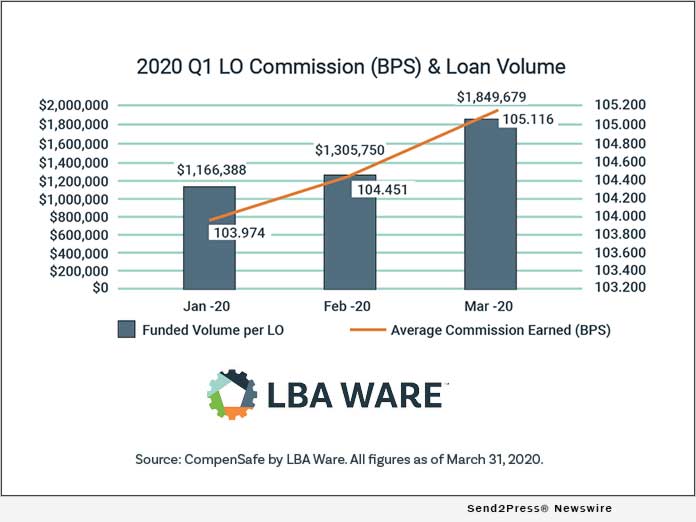 “Intense market demand for mortgages, including refis, helped loan originators earn average commissions approaching $19,000 in March,” said LBA Ware founder and CEO Lori Brewer. “LOs may want to sock some of that payday away as the industry braces for a protracted economic recession, job losses and stiffer underwriting criteria.”

LBA Ware™ is a leading provider of cloud-based software for mortgage lenders. Since 2008, LBA Ware has been on a mission to help mortgage companies reach new heights with software that integrates data, incentivizes performance and inspires results. Today, lenders of all sizes, including some of the nation’s top producing mortgage companies, use LBA Ware’s award-winning technology to enhance lender experiences and maximize the human potential within their organizations. A 2019 Inc. 5000 fastest-growing private company, LBA Ware is headquartered in Macon, Georgia.

ABOUT THE NEWS SOURCE:
LBA Ware

LBA Ware is a software development firm specializing in building software solutions for mortgage and retail bankers. We understand the business challenges facing lenders in today's fast-paced, compliance-centric world. Our focus remains on building software applications that streamlines data integration and repetitive workflow. Through automation, our applications ease the administrative burden on clients and help maximize their operational efficiency, productivity and profitability. Located in Macon, Georgia, LBA Ware is the technology partner for mortgage and retail banking institutions across the nation.

LEGAL NOTICE AND TERMS OF USE: The content of the above press release was provided by the “news source” LBA Ware or authorized agency, who is solely responsible for its accuracy. Send2Press® is the originating wire service for this story and content is Copr. © LBA Ware with newswire version Copr. © 2020 Send2Press (a service of Neotrope). All trademarks acknowledged. Information is believed accurate, as provided by news source or authorized agency, however is not guaranteed, and you assume all risk for use of any information found herein/hereupon.